Secret Service Advertised as ‘New Amenity’ at Trump Tower– Is That Even Legal? 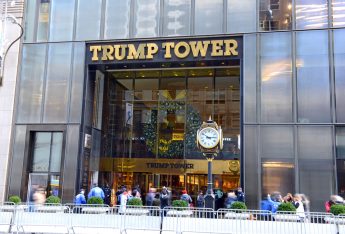 The advertisements started happening almost immediately after Trump was officially pronounced the winner of the November 2016 presidential election.

One of the first known instances was reportedly found in an email sent by the NYC real-estate firm Douglas Elliman that included an advertisement for $2.1 million condo located in Trump Tower

The subject line of the email was said to have read:  “Fifth Avenue Buyers Interested in Secret Service Protection?”

“The New Aminity [sic] – The United States Secret Service,” the flier said, in addition to the phrase, “The Best Value in the Most Secure Building in Manhattan.”

LawNewz.com wanted to look into whether there may be legal issues with real estate brokers using the U.S. Secret Service’s name in commercial advertisements.

Namely, we wanted to know if these brokers may be running afoul of a statute like 18 U.S. Code § 709, which provides:

The important takeaway from this statute is that it essentially prohibits the use the words “Secret Service” in any advertisement if the words are used “in a manner reasonably calculated to convey the impression that such advertisement . . . is approved, endorsed, or authorized by or associated in any manner with, the United States Secret Service.”

So, do the Trump Tower advertisements violates this statute?  At the very least, they may be walking the legal line.  It might even be a case of “first impression” — in the sense that this is not a typical marketing strategy.

“I don’t think anyone would perceive that the Secret Service is sponsoring, endorsing, authorizing, or associating with the ad. In context, I think everyone [understands] (1) the real estate agent is mostly just trying to draw attention, and (2) at most, the claim is that the place will be safer because the Secret Service is there to protect Trump (and not to endorse anything the real estate agent is saying),”  Law professor Eugene Volokh and publisher of the Washington Post’s Volokh Conspiracy blog told LawNewz.com

Volokh said the ads are essentially the same as an ad for pace next to a police station that says, “Police station next door — super safe!”

In such case, the ad is simply making an accurate, truthful statement and “accurate ads don’t violate the law, and are protected by the First Amendment,” he explained.

The Secret Service told LawNewz.com it is aware of the ad and a spokesman promised to provide an additional update as soon as more information if available.

The Douglas Elliman firm has not responded to LawNewz.com’s request for comment, but a company spokesman did tell Politico the ad “was completely unauthorized and done without the knowledge or approval of Douglas Elliman.”