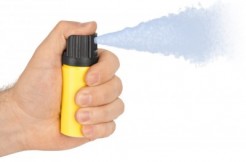 After a North Carolina School Board eased restrictions on pepper spray, one board member suggested the self-defense tool could be used on transgender women in restrooms, suggesting they’d somehow hurt others. The comment was made at a school board meeting on Monday, before the Rowan-Salisbury Board of Education allowed pepper sprays on campus, according to the Salisbury Post.

“Depending on how the courts rule on the bathroom issues, it may be a pretty valuable tool to have on the female students if they go to the bathroom, not knowing who may come in,” board member Chuck Hughes, according to the Post.

North Carolina lawmakers recently passed HB2, which mandates people in publicly run buildings to use restrooms corresponding to the sex on their birth certificate. Supporters claim transgender women are often male sexual predators who pretend to be women to get at victims. That’s what Hughes was getting at in his statement. Critics say HB2 discriminates against transgender people, and that the sexual assault fears are overblown. Now North Carolina and the Department of Justice have clashed, filing dueling lawsuits over the controversial law. The latter claims HB2 violates civil rights law.

In any case, high school students at this North Carolina school district can now carry mace and other defensive sprays on their person. The policy goes into effect when it is published in the 2016 – 2017 student handbook.