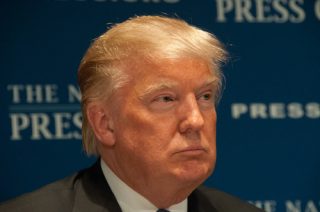 I am a journalist and First Amendment lawyer.  I have spent years defending writers against libel lawsuits.  I’ve told celebrity lawyers to stuff their blowhard cease-and-desist letters.

But I did not expect to be censored by the American Bar Association when I tried to publish my study/article, “Donald J. Trump Is a Libel Bully but Also a Libel Loser.”

But that’s what happened last week.  The ABA refused to publish my article detailing how Trump and his companies have a history of filing meritless speech-related lawsuits – unless I changed my “tone.”

I told the ABA I would not change my article and withdrew it.  A New York-based non-profit media defense lawyer group, the Media Law Resource Center, agreed to publish my article last week, uncensored.

I accepted any risk by publishing my uncensored article with my opinionated language about Trump.  I am a solo practitioner and part-time adjunct faculty member at the University of Southern California, not a big firm partner.  I could be the next Trump libel target.  But the risk is worth it.

My article is far from radical.  I simply reported Trump had filed seven speech-related lawsuits over the past 30 years and failed to win ANY of those lawsuits filed in public court.

I reported Trump’s frivolous libel lawsuits hurt news organizations and others by forcing them to pay stiff legal fees to get rid of his bogus claims.  I said we need more laws to protect people from these frivolous but costly speech-related lawsuits.

Who knows how many reporters, critics, and most recently, alleged groping victims, decide to self-censor for fear of being sued by Trump?

The article was my idea from start to finish.

I pitched my idea for an article about Trump’s libel lawsuit history to the ABA’s Communications Lawyer in late August.  The periodic newsletter is edited by, and directed to, attorneys who specialize in media law litigation in libel, privacy, right of publicity, copyright, and trademark.  The authors are not paid.

My ABA editor, Lee Brenner of Kelley Drye & Warren LLP in Los Angeles, accepted my article idea one day after I pitched it.  I submitted a final version of the article in late September.  Lee said it had been accepted and would be distributed in November.

But on October 19, Lee told me that the ABA made an unusual demand: it needed to change my headline, lead paragraph, and some selected language in my article.  Lee told me that he and the other media lawyers working on the Communications Lawyer pushed back against the ABA brass, but to no avail.

James Dimos, Deputy Executive Director of the ABA, said in an October 19 email to Lee that the ABA was concerned about being sued by Trump, and uncomfortable with the “tone” and “partisan” nature of my article.  The ABA would run my article – but only if key words about Trump were censored.

My catchy and accurate headline, “Donald J. Trump Is a Libel Bully but Also a Libel Loser” would be changed to the bland “Presidential Election Demonstrates Need for anti-SLAPP laws.”

My first sentence, “Donald J. Trump is a libel bully” would be replaced by the dull wording, “One of the many interesting facets of this year’s Presidential campaign has been the multiple attacks on the media, the First Amendment, and the judicial system itself by one of the candidates, Donald J. Trump.”

Also on the ABA chopping block: calling a Trump libel suit “the crankiest” and saying Trump “does not understand” libel law and has “zero sense of humor.”

I wasn’t worried that my censored words would create liability because my words are accurate descriptions of Trump’s legal strategies and losses, protected opinion, and privileged fair reports of official court records.

It’s true most of my 6,500-word, 81-footnoted article was untouched by the ABA’s edits.  But I wanted to preserve my blunt and colorful language to emphasize the urgent threat Trump poses to a free press and free speech.

I also think most lawyer articles are boring.  I am a journalist at heart and try to keep the law from deadening my writing.  I used lively language in my article to attract an audience beyond lawyers.

To use one of Trump’s favorite phrases, it’s “sad” that the ABA censored my article.  The ABA proved my point: that Trump chilled speech by using baseless lawsuits and empty threats.

I am fortunate to live in California, where a special law would allow me to bring a quick motion to dismiss Trump’s speech-related claims and force him to reimburse me for my attorneys’ fees if I win.  The California law is known by the confusing name, the anti-SLAPP law, meant to curb speech-chilling lawsuits known as Strategic Lawsuits Against Public Participation (SLAPP).  We need more of these law in other states.

Meanwhile, do not cave to the fear of Trump.

Susan E. Seager, a Yale Law School grad, is a First Amendment attorney who teaches media law at the University of Southern California.