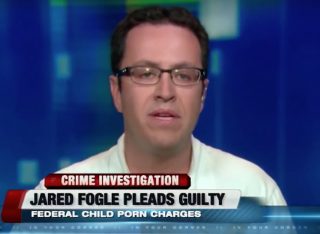 The ex-wife of imprisoned former Subway pitchman Jared Fogel filed a lawsuit on Monday claiming the company received reports about his “sexual interest in and activity with children” beginning in at least 2004 and failed to inform her about the reports. The lawsuit also claims Subway exploited Fogel’s ex-wife and her children by using their likenesses without their consent in a 2015 advertising campaign that depicted Fogel as an upstanding family man.  All of this supposedly caused the family suffer great damage, according to the lawsuit.  There is just one problem, the lawsuit largely fails to demonstrate that family has suffered any measurable damages as a result of Subway’s alleged conduct. That’s a key to any successful lawsuit.

“I filed this lawsuit because I have questions — questions that someday my children will ask me,” Fogel’s ex-wife, Kate McLaughlin, told reporters at tearful news conference on Monday afternoon.

The lawsuit makes a number of somewhat startling accusations against Subway.  For example,  the lawsuit alleges Subway received reports about Fogel’s behavior on at least three occasions, beginning in 2004 when “Subway’s then Senior Vice President of Marketing received a complaint that Jared had approached a young girl” for a sex act at a promotional event in Las Vegas.  Additionally, the lawsuit claims Subway failed to properly investigate the allegations against Fogel because they knew if the allegations were true “they would no longer be able to use [him] as a revenue generating and growth mechanism.”  In other words, the lawsuit is accusing Subway of putting profits ahead of protecting Fogel’s family.  It even goes so far as to claim Subway’s failure to properly investigate the claim “allowed [Fogel] to continue down his criminal path, marry [McLaughlin]” and have children.

While all of those allegations may sound horrible, the complaint lacks any real evidence to support the allegations that Subway’s conduct caused Fogel’s family to suffer any measurable damages.  It is a stretch for the family to essentially argue that it is Subway’s fault McLaughlin even married him in the first place.  Any claims against Subway for damages based on any alleged failure to report Fogel’s conduct would be more appropriately brought by the actual victims of Fogel’s predatory behavior.

However, there is one claim in lawsuit on which the family arguably stands a chance of succeeding and that is the alleged a violation of the statutory Right to Publicity under Ind. Code § 32-36-1 et. seq. On this point, the family argues Subway used their likeness without obtaining proper written consent in a 2015 television advertisement that depicted Fogel as a family man.  According to the Digital Media Law Project, the statute “defines ‘right of publicity’ as a property interest belonging to a ‘personality.’  Furthermore, the statute specifically protects against the use of personality’s likeness “for commercial purposes” without written consent.

Damages are easier to prove under this claim because they can be presumed if the family can simply prove Subway used their likenesses in the advertisement without written consent.  Unlike the other claims in the lawsuit, the family would not be required to demonstrate any sort physical or emotional harm as a result of Subway’s alleged conduct.