Scalia in Repose at Supreme Court as Mourners Pay Respects 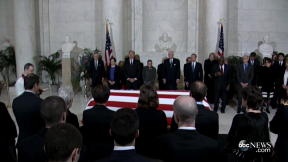 Justice Antonin Scalia’s body was brought to the U.S. Supreme Court building Friday morning, laying in repose on the Lincoln Catafalque as the public paid their respects. Doors opened at 10:30 Friday morning until 8pm, with visitors including students, local residents, and members of Congress saying farewell.

Mourners left flowers outside the building, as well as jars of applesauce, a nod to the 2015 decision upholding Obamacare, where the legal wordsmith’s dissent described the majority opinion as “pure applesauce.”

Earlier in the day, the current Supreme Court justices held a private ceremony, led by the late justice’s son, Father Paul Scalia. Supreme Court police and Scalia’s law clerks served as pallbearers. President Obama and the First Lady are slated to honor Scalia in a visit later on Friday.

The funeral will be held Saturday at the Basilica of the National Shrine of the Immaculate Conception.