Ruth Bader Ginsburg Blasts Donald Trump: ‘I Can’t Imagine What the Country Would Be’ 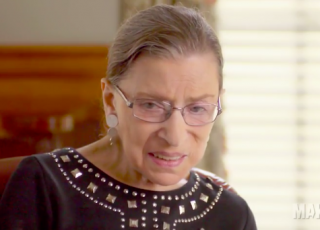 In a highly unusual move, Supreme Court Justice Ruth Bader Ginsburg spoke out from her chambers to critique Congress’ failure to act on the Supreme Court nominee and blast presidential hopeful Donald Trump. While on the Court,  justices rarely talk about politics. In a rather candid interview, Ginsburg not only dabbled in that subject, she also commented on some of the controversial cases that the Supreme Court heard this term. She told The New York Times Supreme Court correspondent, Adam Liptak, the following:

It reminded her of something her husband, Martin D. Ginsburg, a prominent tax lawyer who died in 2010, would have said.

Ginsburg was also critical of Congress for failing to act on President Obama’s Supreme Court nominee, Merrick Garland. “That’s their job,” she told The Times. “There’s nothing in the Constitution that says the president stops being president in his last year.”

She also spoke about some of the court’s controversial decisions and how they would have been impacted if Justice Antonin Scalia was still alive.

She added, “It would be an impossible dream. But I’d love to see Citizens United overruled.” Ginsburg also talked about the Heller opinion which she called a “very bad decision.” The case established the individual right to own guns –something that she says could be re-visited if another gun law case came before the Court.