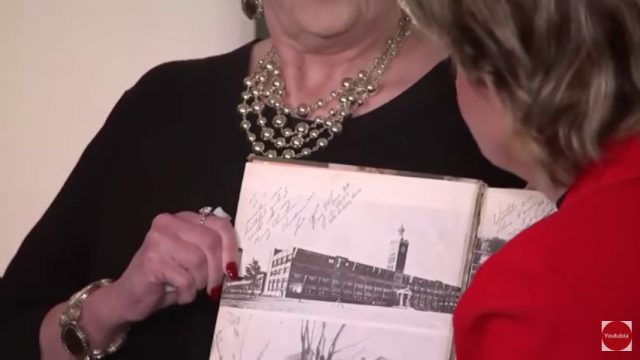 According to Nelson, who today detailed the allegations against Moore in a press conference with attorney Gloria Allred, Moore signed her yearbook as follows: “To a sweeter more beautiful girl I could not say Merry Christmas. Christmas 1977. Love, Roy Moore, D.A. 12-22-77 Olde Hickory House.”

At the time of the alleged yearbook signing, Moore was 29 and Nelson was 16. According to Nelson, however, this wasn’t the first time Moore had the young girl on his mind. Nelson began working at the Olde Hickory House, a diner in Gadsden, Alabama, when she was 15-years-old. At that time, Nelson claims, Moore was a regular who, on multiple occasions, pulled at the ends of her hair and complimented her on her appearance.

Nelson says she never once reciprocated Moore’s affection or advances because she had a boyfriend and didn’t want to want to date someone twice her age.

Later, when Moore was 30, he allegedly offered Nelson a ride home from Olde Hickory House one night when her boyfriend was running late. During this car ride, Moore is alleged to have sexually assaulted Nelson.

According to Nelson at her press conference today, Moore groped the young waitress, forced her head onto his crotch by grabbing and bruising her neck and tried to get her to have sex with him. Adamantly refusing, she said, Nelson was ultimately jettisoned from Moore’s vehicle.

Then, he left his alleged victim with words that have kept her silent until now. According to Nelson, Moore said:

You’re just a child and I am the District Attorney of Etowah County, and if you tell anyone about this, no one will ever believe you.

For video of the yearbook in question, click here.

Gloria Allred is a sensationalist leading a witch hunt, and she is only around to create a spectacle. Allred was the attorney who claims credit for giving us Roe v. Wade which has resulted in the murder of tens of millions of unborn babies.