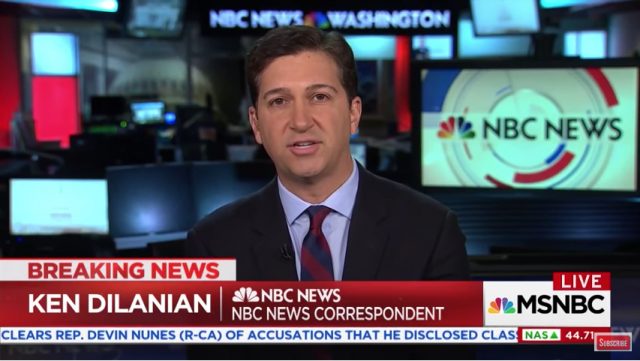 An NBC News reporter who claimed to have “independently confirmed“ CNN‘s admittedly false reporting on Wikileaks and the Trump campaign previously submitted his stories to the Central Intelligence Agency (“CIA”) for prior review.

According to documents obtained by The Intercept, Ken Dilanian, a former Tribune Media national security reporter, has also promised the CIA positive press coverage in the past.

According to Intercept reporter Ken Silverstein, Dilanian “routinely submitted drafts and detailed summaries of his stories to CIA press handlers prior to publication,” while working for the Los Angeles Times.

In one email to a CIA press officer, Dilanian explains that he would like the CIA’s help in making Barack Obama‘s controversial drone-bombing policy more palatable to the American public. Dilanian writes:

I’m working on a story about congressional oversight of drone strikes that can present a good opportunity for you guys…Not only would such a story be reassuring to the public, I would think, but it would also be an opportunity to explore the misinformation about strikes that sometimes comes out of local media reports. It’s one thing for you to say three killed instead of 15, and it’s another for Congressional aides from both parties to back you up. Part of what this story will do, if you can help be [sic] bring it fruition, is quote Congressional officials saying that great care is taken to avoid collateral damage and that the reports of widespread civilian casualties are simply wrong.

On another occasion, after exchanging emails with the CIA on a story about the agency’s presence in Yemen, Dilanian sent a draft of his as-yet-unpublished report along with the subject line, “does this look better?”

On yet another occasion, Dilanian seemingly fished for a way to allow the CIA to lie. He wrote:

And you wouldn’t put out disinformation on this would you? If it was true and you didn’t want to confirm it, you’d say “No comment?” I ask only because covert operations are supposed to be deniable, right?

After the initial report on Dilanian’s collusion with the CIA was released, the former Tribune reporter was gently reprimanded by the Tribune’s current Washington bureau chief, David Lauter, who said, “We have a very clear rule that has been in place for quite a few years that tells reporters not to share copies of stories outside the newsroom. I am disappointed that the emails indicate that Ken may have violated that rule.”

Dilanian’s proven tendency to collude and collaborate with the CIA on his stories is likely to draw intense speculation about his exact role in the latest CNN fake news debacle.

Law&Crime reached out to NBC/Universal for comment on Dilanian’s recently disproven assertion and his past CIA ties but no response was forthcoming at the time of publication.