Rubio Can’t Keep All of His Delegates Away From Trump | Law News
$promoSlice() doesn't exist!

Rubio Can’t Keep All of His Delegates Away From Trump 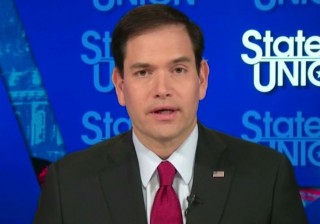 Former Republican Presidential candidate Marco Rubio recently said that he wants the delegates he won in primaries to remain bound to him going into the national convention. Keeping his 172 delegates from siding with one of the remaining candidates before the convention’s first round of voting could be the difference between Donald Trump or Ted Cruz winning the nomination with relative ease, and all hell breaking loose in a brokered convention where everyone’s delegates are up for grabs. Unfortunately for Rubio, a new report from MSNBC’s Ari Melber and NBC News’s Hallie Jackson says that he can’t keep them all.

Nearly 20 percent of Rubio’s delegates (34 of the 172, to be exact) will be free to vote for whichever candidate they choose right away, the report says. State rules in Oklahoma, Minnesota, and Louisianna say that if a candidate is not on the ballot, their delegates can vote for anyone who is. Oklahoma’s GOP Chair Pam Pollard said to NBC News about Rubio that “if he is not on the ballot — those 12 delegates are free to vote whatever way they want.”

Making things even more complicated, most of Rubio’s delegates haven’t even been appointed yet. In Minnesota, Cruz supporters are running for the positions, essentially adding to Cruz’s delegate total before the convention even starts.

Rubio has made it clear that the remaining 138 delegates should stick with him, saying as recently as Tuesday on a radio show that “I want to make sure that they’re there on the first ballot.” Some states are requiring it whether Rubio wants it or not. Virginia’s rules say that delegates are bound to their candidate on the first ballot of the convention no matter what. State GOP spokesperson David D’Onofrio told NBC News, “Even if he stood up and said, ‘All of my people should vote for x,’ in Virginia, they are bound to him on the first ballot.”

Tennessee GOP chairman Ryan Haynes said his state is even more restrictive, binding delegates for the first two ballots, “even if his campaign is suspended.”