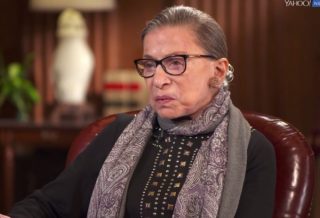 Supreme Court Justice Ruth Bader Ginsburg has not been holding back lately. This time, she’s taking aim at San Francisco 49ers’ Colin Kaepernick for his refusal to stand up during the National Anthem. In a new interview posted on Yahoo,  Katie Couric asks Ginsburg about her thoughts on the growing trend of athletes, including Kaepernick refusing to stand for the anthem.

“I think it’s really dumb of them,” Ginsburg told Couric, “Would I arrest them for doing it? No…I think it’s dumb and disrespectful. I would have the same answer if you asked me about flag burning. I think it’s a terrible thing to do, but I wouldn’t lock a person up for doing it. I would point out how ridiculous it seems to me to do such an act.”

Earlier this year, Ginsburg said she said “regretted” making critical remarks of Donald Trump in which she called him a faker. “Judges should avoid commenting on a candidate for public office. In the future I will be more circumspect,” she said in a July statement.

The new Yahoo video is a wide-ranging interview in which Ginsburg reflects upon several topics including general and religion.