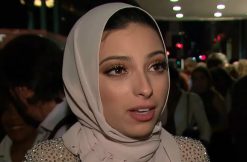 The FBI arrested Salman for allegedly aiding and abetting her husband Omar Mateen in connection to a June 12 mass shooting at the Pulse nightclub in Orlando, Florida. It’s the most devastating mass shooting in American history, with 49 dead and 53 wounded. Raw Story, an outlet with a staunchly liberal reputation, wrote about that news like a lot of the media. According to their article’s time-stamp, they got it up at 12:19 p.m. Eastern Time. Problem was, the picture they used wasn’t of Salman. It was of Tagouri, a Newsy journalist who has absolutely nothing to do with the case. She was not pleased.

.@RawStory also, the woman who was arrested doesn’t even wear hijab….so there’s that -_-

For the sake of comparison, here’s a picture of Salman with Mateen.

Tagouri also said late Monday that the outlet was slow in fixing the mistake, and apologizing.

Still no word from @RawStory…pic still comes up in google cache version of story. Not ok. https://t.co/MzvH1xClkm pic.twitter.com/JWBI8IEfRF

Raw Story has fixed the mistake and apologized, as of Tuesday morning.

“A previous version of this story erroneously featured a photo of activist Noor Tagouri,” their correction states. “Raw Story deeply regrets the error.” The article now features a picture of Mateen.

We reached out to them to learn more.