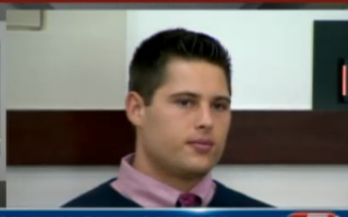 The retrial for the case of former Vanderbilt football player Brandon Vandenburg, who is accused of raping a young woman along with three other men, continued on Tuesday. Much of the proceedings dealt with recorded evidence. First, there was security video footage of where Vandenburg and three others allegedly carried a woman into his dorm building in June 2013. Later in the day, the court heard recordings of interviews Vandenburg gave after the alleged incident.

The first interview was with school officials. Vandenburg said in that conversation that he and the woman were both drunk on the night in question, but that she was awake when he brought her to his dormitory, Gillette Hall, but that she did need assistance walking. He claimed that his three friends helped bring the woman into Vandenburg’s room, and that he left right after they brought her in. He denied having any sexual contact with her that night.

Detective Jason Mayo of the Metro Nashville Police Department took the stand in the afternoon, when the court heard an audio recording of an interview he conducted with Vandenburg prior to his arrest. In that conversation, Vandenburg said he was with the woman on the night in question, and that the other three men happened to be there when they got back to the dorm. He also said he brought the woman to his room and put her to bed because he didn’t know what else to do. He claimed he might have taken a picture, but he may have deleted it because it wasn’t on his phone in the morning. Vandenburg said he did not stay in his room with the woman on the night in question because she had vomited in the room.

The court broke for the day in the middle of the interview, with plans to finish hearing it on Wednesday.

The trial will continue on Wednesday. Stay with LawNewz.com for continuing coverage of the case.