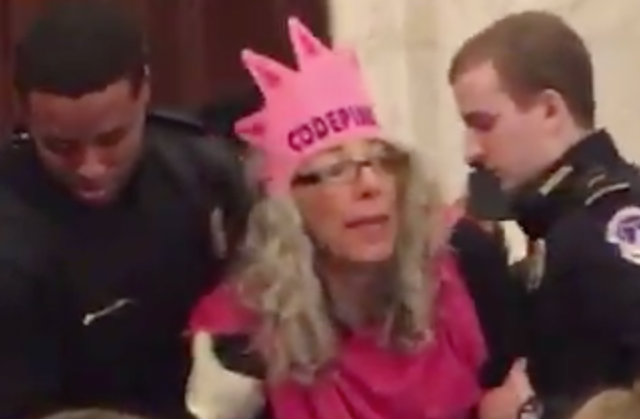 Desiree Ali-Fairooz (also known as Desiree Fairooz) was convicted of misdemeanor charges in May after she laughed during Attorney General Jeff Sessions‘ confirmation hearing. The conviction was overturned by a D.C. judge in July, with a new trial scheduled for later in the year. Now, prosecutors declare that they will no longer be pursuing the case against Ali-Fairooz.

On Monday, federal prosecutors filed a motion of nolle prosequi, which is a formal notice that they are abandoning the charges against Ali-Fairooz. This comes after the U.S. Attorney’s office offered her a plea deal, which she rejected in September, according to D.C. Superior Court records viewed by LawNewz.com.

The trial was set to take place on November 13, but that will no longer be necessary, as the case was dismissed after the court received the prosecution’s motion.

Jurors who initially convicted Ali-Fairooz didn’t necessarily like their decision, but felt they had to with the way the law was worded. One juror told HuffPost at the time, “There’s almost no way that you can find them not guilty.” The jury foreperson said that the conviction was for her behavior while being escorted out of the room, not for the laughing, but the prosecution had argued that laughter itself was enough. Judge Robert Morin took issue with that approach and vacated the conviction.

Ali-Fairozz’s laughter had come after Sen. Richard Shelby said that Sessions’ record of “treating all Americans equally under the law is clear and well-documented.” Sessions had been accused of holding racist views, with the main evidence being comments he made in 1981 and treatment of a campus LGBT group in 1996.