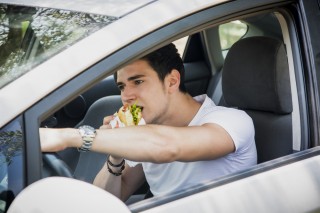 Imagine getting in trouble with the law for drinking and driving, but you were only drinking coffee. That could happen if a New Jersey bill against “distracted driving” passes. The extremely broad proposal would outlaw pretty much any activity by drivers that’s not necessary for driving.

A statement portion of the bill says:

That’s pretty vague, but the website for the New Jersey Department of Law and Public Safety lists a number of activities that are considered “driving distractions.” They include:

I can see it now, cops camping out near fast food drive-thru windows, waiting to catch people in the act of chewing. Or maybe conducting sting operations where they have local radio stations play the same annoying commercial jingles over and over to bust people who shut it off. Or, heaven forbid, a driver engages in full-on conversation. Someone think of the children! Oh wait, that’s not allowed either.

Listen, I get that driving while distracted can be dangerous, but this goes beyond overboard. When using a hand held phone while driving was outlawed, people went nuts, but it made sense. Not only does this proposal go too far, I don’t even see how it can be enforced. It prohibits activity that’s done “in a manner that interferes with the safe operation of the vehicle.” That’s pretty subjective. Does a driver have to actually do something to show that they’re not driving safely, or can a cop just say that having a snack automatically interferes with driving?

The proposed penalties are pretty crazy too. For a first offense, the bill calls for a fine of between $200 and $400. A third offense could cost a driver $800, plus a 90-day license suspension and penalty points.

Let’s hope lawmakers don’t give it the green light.