Project Veritas Monitoring Voter Fraud, but They Might Be Breaking the Law Themselves | Law News
$promoSlice() doesn't exist!

Project Veritas Monitoring Voter Fraud, but They Might Be Breaking the Law Themselves 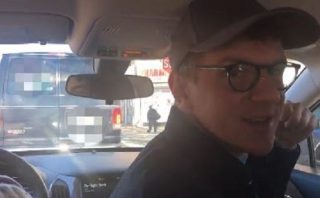 James O’Keefe and his Project Veritas are following voters to polling sites in order to keep an eye out for potential voter fraud, according to a video O’Keefe tweeted Tuesday morning. In the video, he says he’s following a pastor’s bus that is taking people to vote, implying that they might be doing something wrong, without giving any evidence.

In Philadelphia tailing a pastor’s bus that’s bussing people to the polls. #VeritasIsEverywhere & we will catch your #VoterFraud. @PhillyGOP pic.twitter.com/FY9UPOQolp

There’s nothing wrong with providing transportation to voters, but the implication is that the same people are voting multiple times by going to different locations. This goes along with a heavily-edited video that Project Veritas released in October where a New York City Board of Elections commissioner railed against voter fraud, saying “They put them in a bus and go poll site to poll site.”

Now, it remains to be seen whether O’Keefe will actually uncover any wrongdoing, but he better watch himself as closely as he watches others. University of California-IrvineLaw School professor Rick Hasen said on Slate‘s live blog that O’Keefe’s actions could themselves be criminal if he gets too aggressive. Hasen said

The shady James O’Keefe of Project Veritas just released a video showing him following a “pastor’s bus” in Philadelphia supposedly taking people to the polls. It is legal to give people free transportation to vote. It is illegal to hassle people for voting. Once again, O’Keefe’s efforts to find election crimes may be creating them.

If O’Keefe keeps his distance, he may be fine, but if voters notice that he’s following them, he could be the one in trouble with the law.