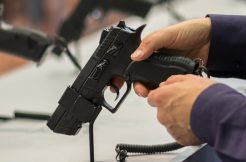 Retired newspaper editor M.D. Harmon died Wednesday after a 16-year-old boy accidentally shot and killed him in his Sanford, Maine home, The Portland Press Herald reports. Officers say the boy and his father, who remain unidentified, were visiting him when he started showing the kid one of his handguns. Wife Margaret Harmon declined to speak about it with the outlet, except to call it an “accidental tragedy.”

The investigation, led by the Maine State and Sanford police, remains ongoing.

According to the Press Herald, he started his 41-year newspaper career with them and the Evening Express in 1970, working his way from reporter to city editor, managing editor, and later editorial writer. He continued to write political op-eds after his 2011 retirement. The outlet described him as a “conservative thinker and a staunch defender of gun rights.”

Here’s an excerpt from his October 14 editorial ripping a Maine gun control referendum on background checks.

The proposal is a back door to universal gun registration – it wouldn’t work without it – and it would do nothing to stop the most common ways criminals get their guns: stealing them, buying them from other crooks or finding a “straw purchaser” who can pass a background check for them. All those ways are already illegal. Hey, let’s make them more illegal!

For now, police decline to explain the circumstances around the shooting. Eg. What caused the misfire? Why was he in the bullet’s path?

It’s worth mentioning that organizations like the National Rifle Association and the National Shooting Sports Foundation have recommendations and rules on gun safety. For example, 1) point the gun in the safest direction, 2) only load the gun when you want to use it, and 3) keep your finger off the trigger until you’re actually going to shot.

Never touch the trigger on a firearm until you actually intend to shoot. Keep your fingers away from the trigger while loading or unloading. Never pull the trigger on any firearm with the safety on the “safe” position or anywhere in between “safe” and “fire.” It is possible that the gun can fire at any time, or even later when you release the safety, without your ever touching the trigger again.

[image via DmyTo and Shutterstock]