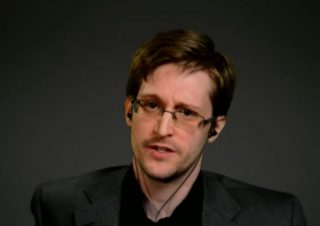 On Friday, German publication Der Spiegel published an interview they conducted with President Barack Obama. The interview touched on a variety of issues, including Edward Snowden, and whether or not the President would issue a pardon to the man who leaked information regarding NSA security practices. Obama said that he cannot, as seen in the following excerpt:

ARD/SPIEGEL: Are you going to pardon Edward Snowden?

Obama: I can’t pardon somebody who hasn’t gone before a court and presented themselves, so that’s not something that I would comment on at this point. I think that Mr. Snowden raised some legitimate concerns. How he did it was something that did not follow the procedures and practices of our intelligence community. If everybody took the approach that I make my own decisions about these issues, then it would be very hard to have an organized government or any kind of national security system.

While Obama’s take on the nature of Snowden’s actions appear thoughtful and nuanced, his statement on his ability to pardon him is flat out incorrect. The law on Presidential pardons may be old, but it’s clear.

The President’s power to pardon comes straight from the Constitution. Section II, Article 2 says that the president “shall have the power to grant reprieves and pardons for offenses against the United States, except in cases of impeachment.” So the President can issue a pardon for any federal offense.

But the question still remains, when can the President issue a pardon? President Obama stated that he can’t do it for someone “who hasn’t gone before the court and presented themselves.” Clearly he didn’t mean someone who was already convicted, because just this year on January 16, Obama issued pardons to four individuals who had not been convicted. So it stands to reason that by “before the court and presented themselves,” Obama meant someone who at least has been charged and arraigned before a judge.

Regardless, it’s still completely incorrect, and there are two Supreme Court cases that prove it.

The 1867 decision in the case Ex Parte Garland dealt with the pardoning of Confederate soldiers after the Civil War. In their decision, the Court said regarding Presidential pardons, “It extends to every offence known to the law, and may be exercised at any time after its commission, either before legal proceedings are taken or during their pendency, or after conviction and judgment.”

There you go. A pardon can take place “before legal proceedings are taken.”

Now, maybe the President hadn’t considered a Civil War-era case. But surely he’s familiar with a more recent situation, like President Gerald Ford‘s pardon of President Richard Nixon? Ford granted Nixon a full pardon for his involvement in the Watergate scandal, even though Nixon was never charged with any offenses. Nixon resigned before formally facing impeachment.

Indeed, Ford relied on another case in making his decision to pardon Nixon. The Supreme Court’s 1915 decision in Burdick v. United States explored the very nature of a pardon. Far from being a complete exoneration, the Court said that a pardon “carries an imputation of guilt; acceptance a confession of it.” As a result, a pardon may not simply be issued without the recipient accepting it. So in order for Nixon to accept his pardon, he had to admit guilt. Barton Becker, the attorney Ford sent to Nixon to discuss the pardon, has spoken about how important it was for Ford that Nixon understood Burdick: that by accepting a pardon, he was acknowledging guilt. Becker said Nixon was aware.

So when President Obama said that he can’t pardon Edward Snowden before he appears in court, he was wrong. Whether or not Snowden would admit guilt and accept a pardon, however, may be another story.

[Screengrab via University of Chicago]