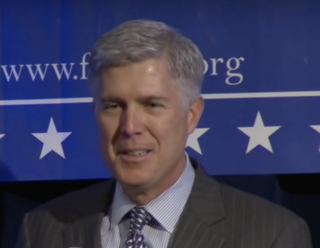 In the incessantly binary world of cable news media, it’s easy to forget that judges aren’t (and shouldn’t be) classified as simply “liberal” or “conservative.” A judge’s position on things like abortion or the death penalty are certainly important, but equally relevant is a judge’s overall methodology; how a decision is made is just as critical as what that outcome was achieved.

49 year-old 10th Circuit judge Neil Gorsuch has been said to be one of leading contenders to take the seat of the late Antonin Scalia. Despite my disagreement with a great many of Scalia’s decisions, I was an unabashed fan of the man himself; his unwavering commitment to say what he meant and mean what he said stood out against a tableau of Washington double-talk and multi-tiered judicial balancing tests.

Like Scalia, Judge Gorsuch is also known for clear writing in his opinions and textualism in his analyses. For those who aren’t ardent Scaliaphiles, “textualism” is a method of statutory interpretation made famous by the late justice, who idolized the written rule above all else. A textualist judge bases decisions resolutely in the written word of the applicable statute, without looking to background information, legislative history, or pop culture. It’s like the judicial version of “Just the facts ma’am.” Scalia himself explained that textualism is all about the reasonable interpretation of the written word: “A text should not be construed strictly, and it should not be construed leniently; it should be construed reasonably, to contain all that it fairly means.”  Judge Gorsuch is a similar advocate for a common-sense interpretation of statutes that sticks squarely to the words on the page.

His commitment to textualism should make Judge Gorsuch neither friend nor foe to politically-ideological courtwatchers. Whatever Judge Gorsuch’s predilections are, textualism itself is simply an analytical philosophy—not a guarantor of outcomes.

Here are some arenas in which Judge Gorsuch’s reasoning has played out to date:

He dissented in a criminal case, saying that it was unfair for an ambiguous criminal statute to be construed against the defendant:

Judge Gorsuch dissented in  United States v. Games-Perez, holding fast to the importance of text above all else – even though his decision would have meant a win for the criminal defendant. The appellant had been convicted under a statute with a common ambiguity; the statute made it a crime for a felon to knowingly possess a gun – but was unclear whether the “knowing” element applied only to the gun ownership, or also to the person’s status as a “felon.” Strange as it may sound, plenty of people are technically felons, but are unaware about the classification because they weren’t made to serve jailtime. In his dissent, Judge Gorsuch was just not having the majority’s whole “let’s look at the legislative notes and see what the legislature really meant when it wrote this statute” position. He called out the problem with the majority’s logic: “The problem with all this is that hidden intentions never trump expressed ones.” Gorsuch went on to discuss the particularly unacceptable injustice resulting from imprisoning a person based on an ambiguous statute that the person might not even have violated.

He refused to strike down a Colorado environmental law:

The Dormant Commerce Clause is a topic that gives law students plenty of headaches, but rarely makes headlines. That’s probably because it’s not a “clause” at all. The basic concept is that because Congress is specifically given the power to regulate interstate commerce, individual states are not permitted to tread on Congress’ turf even when Congress hasn’t specifically marked its territory. When a state makes a law with the potential to seriously impact the economy outside that state’s border, the law is often deemed improper as “violating the dormant commerce clause.” It’s the ultimate turf-battle of federalism, and the only turf markers are those in the minds of judges.

If this sounds vague and confusing, that’s because it is. And Judge Gorsuch is not a fan. It’s also not really a political issue. The Dormant Commerce Clause is used to strike down overreaching state statutes; but whether such a strike would please liberals or conservatives depends on what, specifically, the statute in question says. Judge Gorsuch is of the mind that rules are to come from legislators and not from judges, and that the dormant commerce clause causes more trouble than its worth. In Energy and Environment Legal Institute v. Epel, he refused to apply the dormant commerce clause to strike down a Colorado clean-energy program, saying:

“whatever doctrinal pigeonhole you choose to place them in, we don’t see how [past case law requires] us to strike down Colorado’s mandate. For that mandate just doesn’t share any of the three essential characteristics that mark those cases: it isn’t a price control statute, it doesn’t link prices paid in Colorado with those paid out of state, and it does not discriminate against out-of-staters.”

What does this tell us about potential Justice Gorsuch? Likely that he will be predictable and consistent when it comes to analyzing the scope of state versus federal authority. He is less likely to be swayed by slippery-slope arguments or the social value of the laws in question. Likely, these kinds of decisions will make him a sometimes-hero, sometimes-villain. Kinda like Deadpool.

This is one area that may become increasingly interesting in the context of federal administrative agencies led by cabinet members who are widely despised. Since the mid-80s, courts have applied the “Chevron Doctrine“—the rule that when Congress enacts an ambiguously-worded administrative statute, the courts should let the agency in question enforce that statute however it sees fit (except for anything that is clearly forbidden). Judge Gorsuch has been clear in his distaste for this rule, writing “We managed to live with the administrative state before Chevron. We could do it again.”

Even in the context of administrative law, it seems that Gorsuch prefers the standard rules: legislators write the rules, judges interpret them, and the executive branch simply enforces. When there’s a question about what the rules mean, administrative agencies are to ask and judges are to answer. Such a position is clearly “conservative” in the true sense of the word; it restricts government and almost hermetically seals the powers of each branch from one another. But as with the dormant commerce clause, who would be a likely supporter of such a decision depends largely on which administrative regulation was being tested. Many liberals would be glad to see Betsy DeVos and Rick Perry have less discretion in enforcing their respective agencies’ rules – but many conservatives would be just as glad at the idea that federal regulations will be generally limited under a bench including Justice Gorsuch.