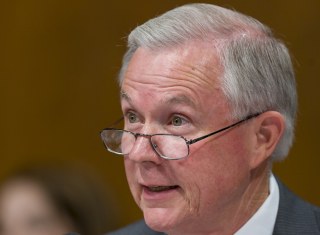 Speculation is rampant as Donald Trump assembles his cabinet, with new names of potential White House officials being tossed around at a dizzying rate. But one name in particular is drawing some concern, given the position he’s linked to.

Jeff Sessions has been a Trump supporter since the beginning. During the primary season, it seemed like Trump dropped Sessions’ name in pretty much every speech he gave. So it’s no surprise that the new President-elect is considering the Alabama Senator for a prominent role in his new administration. With talk that Sessions may be the new U.S. Attorney General, some racially charged remarks from his past are raising eyebrows.

The New York Times dug up testimony from when Sessions was up for a federal judge position. One attorney stated that Sessions regarded organizations like the ACLU and the NAACP “un-American” because they were “trying to force civil rights down the throats of people.” Another attorney, who is black, said that Sessions once called him “boy.” That same lawyer also recalled how Sessions once quipped that he didn’t have a problem with the KKK “until I found out they smoked pot.”

Sessions denied calling the man “boy,” but did not refute the other allegations against him, including one where a prosecutor told Sessions that a judge called a white lawyer “a disgrace to his race” for representing black clients. Sessions supposedly responded, “maybe he is.” Sessions responded to that allegation at a hearing, saying, “I recall a conversation in which that was mentioned … I do not know why I would have said that, and I certainly do not believe that.” Sessions was ultimately denied the judgeship.

Granted, this was all 30 years ago, but it has caused alarm, given the prospect that the potential U.S. Attorney General may have problems with civil rights or whites representing minorities. It also adds fuel to the fire surrounding claims that white supremacists are infiltrating the White House, thanks to a flurry of accusations being hurled at Trump’s newly-appointed chief strategist, former Breitbart executive Steve Bannon.