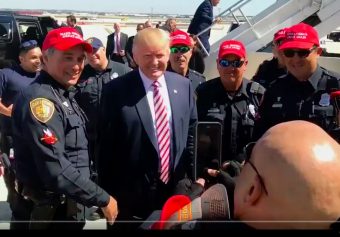 “I have met personally with the involved offices and the following correction action will be taken: six supervisors will be issued a written reprimand and seventeen officers will be provided written counseling. In addition, as part of the corrective action, the officers involved with receive training this month that will focus on the importance of impartiality and fairness in performance of officials duties,” Chief McManus said in a statement.

Donald Trump tweeted about the San Antonio rally on October 11. “Thank you, fellas,” Trump can be heard on the video he posted to his twitter account.