Please, Our Second Amendment Rights Are Not ‘Under Attack’ By Gun Bills 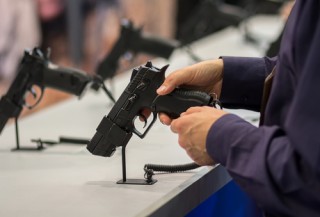 Chris Murphy, a Democratic Senator from Connecticut, just made the top-ten list of filibusters in the last century. Murphy’s fifteen-hour filibuster worked, and as a result, the Senate will soon vote on some amendments to gun legislation.

The fact that such legislation required a filibuster to get to a vote is beyond absurd. Congress’ entire job is to understand what its constituents support, propose related legislation and vote on those proposals. It’s a pretty easy system: read the bill and vote against it if you don’t like it. I get that there are lots of people who oppose any laws that regulate gun ownership – but that doesn’t change the way the whole legislation thing works. Taxpayers foot the bill on the salaries of our so-called representatives and this is what they do with the time and money? Stamp their feet and refuse to even listen to suggestions until they are forced to do so like petulant children?  Gross.

It’s nonsense and we shouldn’t stand for it.

I’ve about had it with the “gun conversation.” Too much deference has already been given to those who oppose gun control. There are plenty of valid arguments to oppose specific pieces of gun legislation – but none of those arguments are the ones making headlines. “They’re trying to take away our Second Amendment Rights!” cries the NRA and its minions.   Well, buckle up, buttercup. Its time for a primer on Constitutional rights.

All gun owners must ACT NOW to save their #2A rights! https://t.co/zn7ACCQ84G

The Constitution grants us a whole bucketload of rights, and everyone has their favorites. I’m a big fan of #1 (free speech, press, and privacy) and #4 (the right against unreasonable searches and seizures) – but hey, that’s just me. There are a lot of other good ones to choose from. Here’s the thing, though – none of our Constitutional rights are absolute and unfettered. Not a one. Freedom of Speech is such an important right that the framers put it right up there at number one – and yet, it’s illegal to yell “fire!” in a crowded theater. Hate speech, obscenity, libel and slander are also illegal. And while we can certainly have intelligent debate over what factual situations fit into those unprotected categories of speech, it’s not remotely arguable that such limitations do not or should not exist.

And it doesn’t just work that way for free speech. There’s also the right to vote. That’s a pretty uncontroversial right. So uncontroversial, in fact, that the framers didn’t even feel the need to include it in the Bill of Rights. Yet, that one is not absolute either. Children and felons can’t vote, and we didn’t need a filibuster to sort that one out. Every right, whether enumerated by the Constitution or inferred in some other way, has some limitations; whether were talking about jury trials, or the right to counsel, or free press or even due process – the idea that these rights can and should be qualified is not up for debate. The only appropriate question is whether a specific limitation is appropriate, or whether it goes too far and abrogates the underlying right while innocently pretending to simply “regulate” it.

None of this is my personal opinion. This is just how it works. So when the NRA or its fat-cat cronies say things like “we have to save our Second Amendment rights,” they’re stoking a fire kindled with ignorance and ignited by propaganda. Our second amendment rights are not “under attack” by gun-control legislation. They’re just being treated like the rights that stem from all the other damn amendments.

And let’s be serious.  None of the gun laws proposed come remotely close to regulating the Second Amendment out of existence. Sidebar: to see what it looks like when a right is “regulated” to the point of making the right worthless, check out abortion laws in Oklahoma and South Carolina.

The regulations proposed this week ban people on the government’s terrorist watch list from obtaining gun licenses and whether to expand background checks to gun shows and internet sales.  Doesn’t sound so harsh to me.  Even a person who would vote against such obviously necessary limitations on gun ownership would be hard-pressed to come up with a valid reason why Congress shouldn’t at least consider these proposals. Gun violence is a serious problem in this country, and any elected official who shirks his or her obligation to be part of the solution needs to be removed for cause and right now.

And here’s where the current political situation is pretty relevant. The Republican party’s presumptive nominee is someone whose entire political platform has been built atop rantings over immigration reform.   According to Donald Trump, Muslims should be temporarily banned from entering the U.S. because their ideologies threaten American safety, because “they don’t think like us,” and because “we don’t know who the hell they are.” Trump made such statements referring to the San Bernadino and Orlando shootings yesterday at an Atlanta rally. And Trump specifically acknowledged that the Orlando shooter was an American-born citizen – but grouped him together as part of the problem because the shooter’s father was an Afghani immigrant. The crowd cheered, because such telling-it-like-it-is-common-sense is Trump’s signature and his words resonated.

As willfully blind as Trump supporters are, though, even they cannot resolve the logical paradox. If common sense dictates the need to keep potentially dangerous strangers out of our country for safety reasons, wouldn’t we also need to keep guns out of the hands of potentially dangerous strangers who are already here? Trump himself has already begun the process to meet with the NRA on that front.

I will be meeting with the NRA, who has endorsed me, about not allowing people on the terrorist watch list, or the no fly list, to buy guns.

Trump has based an entire campaign on insanely overbroad solutions to existing problems. In gun control, we may have found the issue for which Trump’s position accomplishes what so many have been attempting for so long: showing that intelligent regulation of firearms is actually what the majority of Americans want, and what all Americans deserve.