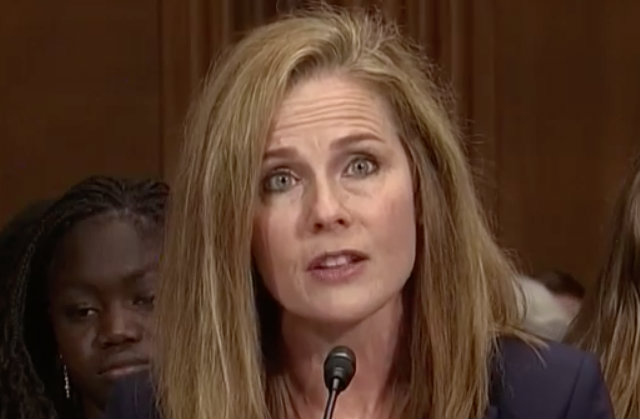 Amy Coney Barrett — who was already confirmed, despite only having one case — said judges shouldn’t follow the law if it clashes with their religious beliefs. #BadForWomen #CourtsMatter

They took shots at new 7th Circuit Appeals Judge Amy Coney Barrett, who was confirmed in October in a 55 to 43 vote. According to Planned Parenthood, Barrett straight up said that judges shouldn’t follow the law if it clashes with their religious beliefs. The organization’s angle on this is pretty obvious. Roe v. Wade, which legalized abortion nationwide, isn’t the most popular ruling among religious conservatives. And a judge saying that judges should ignore laws that conflicts with religion? Well, that’s a huge deal, if Barrett really did say that.

Except, as far as we can see, she never did. Planned Parenthood didn’t immediately respond to a Law&Crime request for comment Tuesday evening, but we’ll update if they reply with clarification about the tweet.

Meanwhile, that post is getting a bad reception online. A couple of law professors actually took to Twitter, and called out the organization.

Here’s a post by Professor Carissa Byrne Hessick, a criminal law professor over at the University of North Carolina School of Law:

This is a false statement of Judge Barrett’s views. I hope that someone at @PPact will correct it. https://t.co/NmuahpVJsC

And here’s Professor Anthony M. Kreis, who teaches legal writing at the Chicago-Kent College of Kent:

I’ve yet to love a Trump judicial nominee. However, I’ve read this article. It isn’t what it said. Liberals should aim their fire where it is truly deserved. This isn’t it. https://t.co/LvCqZgF0No

Law&Crime reached out to the professors, and they both said Planned Parenthood was referencing a 1998 article Barrett co-wrote called “Catholic Judges in Capital Cases,” it examines ways that religious judges should handle enforcing laws that may conflict with their beliefs. In this case, it’s Catholic judges who oppose the death penalty. And well, the article doesn’t say that judges should ignore the law. It actually says the opposite.

“It would betray a public trust and undermine this system if judges who flatly opposed capital punishment were to cheat–to take charge of sentencing hearings and manipulate the law and evidence in order to save lives,” wrote Barrett and co-author John H. Garvey.

“It’s misleading at best,” Hessick told Law&Crime in a phone interview. She pointed out that the article said that judges should recuse themselves when they have no other way to reconcile their religious beliefs with the law. But Hessick argued that Planned Parenthood’s tweet seemed like an honest mistake, and that they should just fix it. She pointed at the media coverage over Barrett’s confirmation hearing, and said that the judge’s actual position might have been “garbled.”

Kreis had the same assessment of Barrett’s article.

“I have never read the article as advocating that judges of faith impose their religious views when their faith conflicts with the law,” he told Law&Crime in an emailed statement. “To the contrary, the article offers that judges should recuse themselves when they cannot reconcile their faith with the law. There can be a healthy debate about standards of judicial recusal, and concerns that recusal can be abused if judges are allowed to pick and choose what cases they hear are legitimate. However, I don’t see the article as endorsing religious supremacy over the rule of law.”

Barrett said during her September confirmation hearing that there are no types of cases from which she would need to recuse herself “on grounds of conscience.” And she also defended the idea behind her 1998 article.

“I continue to subscribe to the core argument of that article, which is that a judge may never subvert the law or twist it in any way to match the judge’s convictions,” she told Senators.