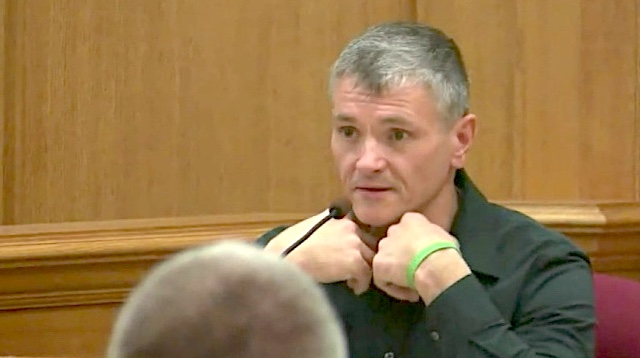 A defendant accused of killing his wife in western Wisconsin and of disguising the crime as a freak pipe-through-the-windshield car accident has taken the stand in his own defense and has partially changed his version of events the day his wife died. The defendant, Todd Kendhammer, is accused of first-degree intentional homicide in relation to the death of his 46-year-old wife, Barbara Kendhammer.

At various points in his career, Kendhammer worked for a glass replacement firm. Kendhammer had a spare windshield he wanted to get rid of, so he told investigators early in their investigation into wife Barbara Kendhammer’s death that he was going to check out a vehicle for a man named Justin Heim, whom he heard needed a new windshield through a co-worker, Ben Pfaff, who was a mutual acquaintance.

Kendhammer’s defense attorney reminded him that in other statements to authorities, he said he was going to Holmen, Wisconsin, to check out a blue Ford pickup truck around Shefelbine Hill.

Kendhammer testified that he was out of it during the recorded police interview and that was the reason for his mistake.  “When I watch those tapes and I watch that video, that’s not me. I wasn’t thinking about where I was going or what I was doing. I was thinking of Barb,” he testified. That is his explanation for bringing Heim and Pfaff into the equation.

#ToddKendhammer – To explain why two witnesses testified they did not arrange with defendant to replace a windshield that morning, the defendant says he was mistaken when he told police the names. Says it was someone else. pic.twitter.com/qZGenIJtTO

The state’s medical examiner testified that the injuries Barbara Kendhammer suffered could not, in her opinion, have been caused by a pipe striking and penetrating a windshield. Defense expert Dr. Barry Bates, a professor who specializes in biomechanics, said all of the victim’s major injuries were caused by the pipe and the resulting forces on the body and said he directly disagreed with the medical examiner’s opinion of what happened.