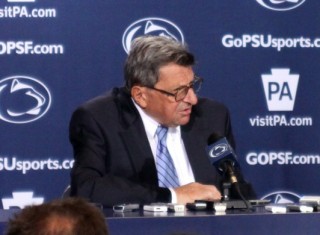 Recent reports have indicated that former Penn State University football coach Joe Paterno knew about alleged sexual abuse by his assistant Jerry Sandusky as early as 1971. University President Eric Barron issued a statement on Sunday saying the reports are “unsubstantiated and unsupported by any evidence other than a claim by an alleged victim.” This supports what LawNewz.com guest columnist John Ziegler, who has followed the Sandusky scandal extensively, said on Saturday.

Barron railed against the media for running with the stories as if they were established facts, when they are only accusations from alleged victims. “I am appalled by the rumor, innuendo and rush to judgment that have accompanied the media stories surrounding these allegations,” Barron said about two reports that Paterno knew about Sandusky’s abuse in the 1970s. “They date from the 1970s,” Barron said. “Coach Paterno is not alive to refute them. His family has denied them.” It had previously been established that school officials knew of Sandusky’s abuse back in 2001, when a graduate assistant told Paterno about an incident.

He went on to say that there is no evidence that any assault back then was reported to Paterno. He announced:

Over the last two days we have worked to be diligent in reanalyzing the record of reports and depositions to ensure that our reactions and comments are both responsible and trustworthy.

Barron lamented that the court of public opinion does not always adhere to facts.

We should not be rendering judgments about the actions of Coach Paterno or any other former employees of Penn State based on incomplete, sensationalized media accounts.