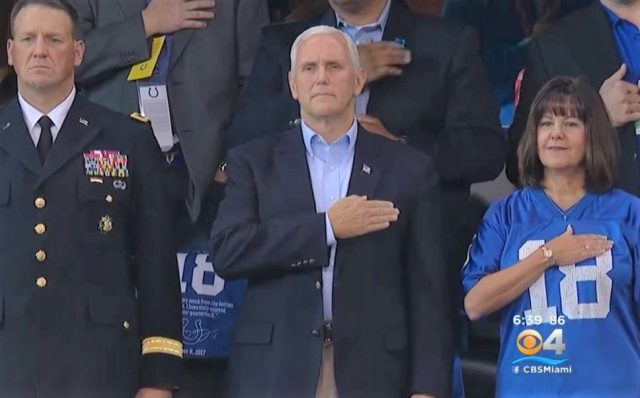 In a recent Treasury Department memo analyzing Steven Mnuchin’s $811,000 in military flights and discussing the Trump Administration’s travel policy more broadly, White House budget director Mick Mulvaney wrote that “just because something is legal doesn’t make it right.”  Speaking of “legal but not right,” Vice President Mike Pence appears to have spent more than $200,000 in travel funds yesterday so that he could leave a football game and pronounce himself the ultimate patriot.

Before we go further, let’s just get my personal analysis of the knee-taking out of the way (all of which should be viewed through the prism of my never having cared about anything the NFL does while on any field). Peaceful protest is a valuable part of all democracies; when it’s done correctly, it can be powerful, meaningful, and quintessentially American – see e.g. the Montgomery Bus Boycott, Gandhi‘s Salt March. Racism generally and police violence specifically are problems in our society that need fixing. Using the flag in a non-violent protest does not devalue the flag, but rather, reinforces the meaning of the flag as a symbol. All that said, this kneeling business is too amorphous – and now, too trendy – to have any real value to anyone other than media outlets. There’s no measurable way for protesters to determine when their largely confused goals have been met, so even the best part of the mission is sure to fail; put that together with pictures of proud parents and their five-year-olds kneeling, and “misguided” is putting it mildly.   When protest transforms from meaningful individual choice to groupthink-type fad, it stands even less chance of achieving its initially noble goals.

Yesterday, though, the most ludicrous thing wasn’t athletes making spectacles of themselves, or pseudo-patriotic fans waving around their righteous indignation like a foam finger. The real absurdity is our White House wasting both its our money and its influence to strengthen ties with a base who already loves it. That’s right, Trump-lovers. You are being used. And we’re all paying for it. At the center of it all is our spotlight-seeking sycophant-at-arms, Mike Pence.

Pence is a lot of things, but he’s definitely not stupid. Wasteful, opportunistic, a total sell-out? Maybe. Stupid? No. He saw a chance to make headlines for himself, and he jumped at it, probably humming “2024” all the while. Pence likely calculated the risks and concluded that the only people who would call him out for play-acting an on-the-spot decision to exit were those who already hate him. Hell, I don’t even watch football, and I knew the kneeling would be happening yesterday. Obviously, the Vice President planned his little pretend-to-attend charade with full knowledge that it would “require” an “early” exit. He even made sure to alert the press pool, so that his foot-stomping could be captured in living color:

As media pool has been made aware, a staffer told pool that VPOTUS may depart the game early. Did not indicate how early. https://t.co/G1f2WljJAW

Grosser still is that Donald Trump can’t even let his own Vice President have a moment of glory, and immediately rushed to steal Pence’s thunder:

I asked @VP Pence to leave stadium if any players kneeled, disrespecting our country. I am proud of him and @SecondLady Karen.

Not exactly gracious. I can almost hear Pence screaming, “No! It was my idea the whole time!” Either way, though, this branding exercise came at a hefty price.

Rep. Adam Schiff (D-California) wasted no time calling Pence out for the cost of his PR stunt:

After all the scandals involving unnecessarily expensive travel by cabinet secretaries, how much taxpayer money was wasted on this stunt? https://t.co/R4SFCTCMUJ

Today, statistician Nate Silver analyzed the American reaction to the NFL anthem protest, and concluded what many of us already suspected: most Americans dislike protests involving the flag or anthem. Similarly, as you may have suspected, Americans vary on everything from their views on Black Lives Matter to their knowledge of the First Amendment.

In context, Mike Pence’s grand exit feels like a $200,000 PR campaign encouraging kids to like pizza. It was unnecessary, wasteful, and aimed at the lowest possible common denominator. If the Vice President wants to use his own personal money (maybe the dollars he saves by dining at home instead of with female colleagues), he’s welcome to do so. But it would be great if he went ahead and stopped using my tax dollars to fan his own ego.