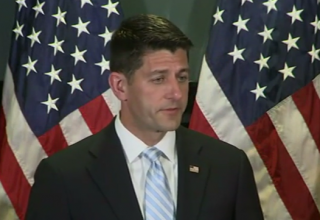 Speaker of the House Paul Ryan addressed the media on Wednesday, in the wake of the FBI Director James Comey‘s address regarding Hillary Clinton‘s use of a private email server while she was Secretary of State. While Comey recommended on Tuesday that Clinton not be indicted, he did say that there were numerous instances where Clinton sent and received classified materials through her private, non-government email address. Because of this, Ryan called for Director of National Intelligence James Clapper to deny Clinton access to classified information during her Presidential campaign.

“It’s the least we can do,” Ryan said, “given that she was so reckless in handling classified material, and sending classified information on unsecure servers.”