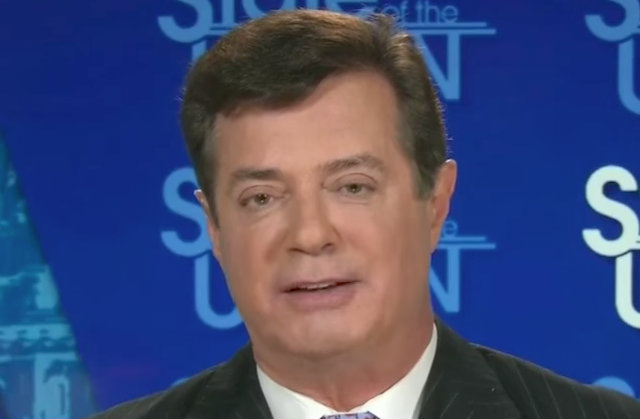 With big charges, come big bonds. On Saturday, former Trump campaign manager Paul Manafort put up $12.5 million worth of assets to end his house arrest. His attorneys filed a motion to modify conditions of release, in anticipation of a bond hearing scheduled for Monday at 9:30 a.m. EST in a D.C. federal court.

Last week, Manafort posted an unsecured bond of $10 million, but this came with home confinement. U.S. District Judge Amy Jackson also worried aloud about him being a flight risk.

In Saturday’s filing, his attorneys said no, he surely wasn’t:

Along these travel-related lines, much has been made of Mr. Manafort’s possession of three different passports. (See Government Memorandum at 12, n.5). While some reports have painted this as though Mr. Manafort is akin to a 68-year-old “Jason Bourne” character, the facts are much more mundane. Mr. Manafort possessed a passport, the type of which is generally held by most U.S. citizens. He also possessed a second passport to submit with visa applications to certain foreign countries. (The process for obtaining a visa can sometimes be lengthy and U.S. citizens who travel abroad frequently are no doubt familiar with this circumstance.)

He only got the third passport after temporarily losing the primary one, and he contacted the State Department about all this, they said.

His attorneys offered some pretty pricey assets to assure the court he will show up for hearings: two properties in New York City (including his Trump Tower apartment), a home in Palm Beach Gardens, Florida, and a “combination” of life insurance polices held in trust or even under his or his wife’s name. Sum value: $12.5 million. They also offered sureties signed by family members. In return, Manafort gets to travel to D.C., Florida (where he lives), Virginia, and New York “where he has substantial business and makes his living.”

A special counsel is looking at whether the Trump campaign colluded with Russia’s 2016 election interference, but the investigation led to separate charges against Manafort and colleague Richard Gates. Prosecutors said they served as unregistered agents of the Ukrainian government. The defendants face multiple charges, including money laundering. These accusations have nothing to do with alleged ties between Moscow and the Trump campaign.