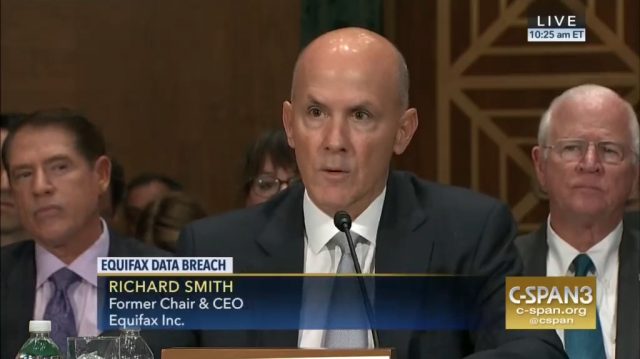 Yesterday, just after Equifax’s well-paid former CEO Richard Smith was grilled by the Senate Banking Committee, a bi-partisan group of U.S. senators pointed out that Smith’s former company was recently awarded a government contract worth $7.2 million.

The Internal Revenue Service (“IRS”) quietly awarded that contract to Equifax earlier this week, in order “to verify taxpayer identity and to assist in ongoing identity verification and validations needs of the” IRS.

In a press release issued by Elizabeth Warren (D-MA) and Ben Sasse (R-NE), the senators wrote:

Right now, no businesses or consumers in Massachusetts or Nebraska would blindly trust Equifax to protect against fraud or handle sensitive personal information. It is surprising that the IRS would choose to do so given its legal obligations to protect Americans’ privacy. The catastrophic breach at Equifax puts a significant burden on the company to earn any government contract, and on the IRS to explain fully why such a contract was awarded. If the IRS cannot sufficiently do so, this contract should be rescinded.

The press release also notes that Sasse and Warren wrote to IRS Commissioner John Koskinen and posed a series of questions regarding the department’s decisions that led up to the contract being awarded. Specifically, Warren and Sasse were keen to know whether Equifax had committed to any additional cybersecurity efforts after the breach which potentially impacted 143 million Americans.

Smith, who oversaw the massive data breach, despite being trolled by the Monopoly Man, will retire with $90 million.