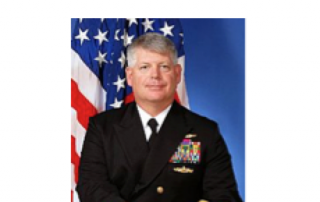 In a U.S. District Court in San Diego, Navy Rear Admiral Robert Gilbeau is expected to plead guilty to lying to federal prosecutors about his ties to Leonard Glenn Francis, a Singapore-based defense contractor who also goes by ‘Fat Leonard’.  This guilty plea comes after the sweeping ‘Fat Leonard’ scandal which has rocked the U.S. Navy with bribery and corruption.  Gilbeau was a high ranking supply officer in the Navy and had long been under scrutiny for his ties to Francis according to the Washington Post.  He was also under investigation for his ties to defense contractors operating in Afghanistan. Gilbeau is also the highest ranking officer to be convicted within the case.

Francis allegedly had a series of Naval informants within the chain of command that provided classified information such as ship movements to Francis in order to give his company, Glenn Defense Marine Asia, a competitive advantage within the market. He was also reportedly notorious in the Navy for bribing his informants with various gifts including cash, sex, and other items in order to win more defense contracts.  He was especially notorious for his extravagant dinners for the senior officers that were members of his informant circle.

“Through the course of this investigation – for many reasons I can’t get into – I did in fact make a false statement. And in this unfortunate circumstance, I’m the one that needs to be responsible for my actions, so I will be pleading to making a false statement.  I’m proud of my 37 years of naval service. I believe in holding people accountable,” Gilbeau said in a statement to USNI News.

After being informed of the guilty plea, Admiral John Richardson, Chief of Naval Operations, did not mince words.

“This behavior is inconsistent with our standards and the expectations the nation has for us as military professionals. It damages the trust that the nation places in us, and is an embarrassment to the Navy.  We are fully cooperating with officials from the Department of Justice and law enforcement agencies to ensure that those who violated the law are held accountable,” said Richardson in a written statement according to USNI news.

This investigation may be the largest in US Naval history with federal prosecutors investigating nearly 200 individuals in this scandal.  14 people, including Gilbeau, have been charged in federal court with all but one pleading guilty.

“We must go further,” Admiral Richardson said in a statement according to the Washington Post,“We must hold ourselves accountable to the highest standards of behavior, and work tirelessly to restore any damage that has been done to these crucial relationships.”