Officer William Porter Will Testify in the Other Freddie Gray Trials 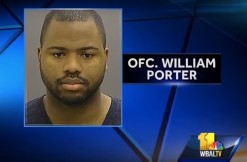 After what felt like a long wait, the Maryland Court of Appeals ruled Tuesday that Officer William Porter must testify in other trials examining the death of Baltimore resident Freddie Gray.

Lawyers for Porter argued in March that making him testify would violate his Fifth Amendment right.

Backstory: Six police officers in Baltimore, Maryland were charged in the death of Gray, who fell into a coma while riding in a police van on April 12. Porter, the driver, got the heaviest charge, second-degree depraved heart murder, and was tried first. But that ended in a hung jury in December.

The prosecutors in the other trials really wanted him as a witness, but his lawyers worried this could undermine the defense at his retrial. Nonetheless, prosecutors had been willing to give him limited immunity for his testimony.

Porter is expected to be a witness in the trials against Sgt. Alicia White, Officer Caesar Goodson, Lt. Brian Rice, Officer Edward Nero, and Officer Garrett Miller. He faces the retrial in June.

[image of Porter via WBAL screengrab]
–