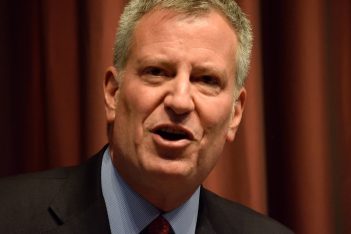 The Mayor of New York City, Bill DeBlasio, weighed in on the presidential election on Tuesday, telling reporters that he believed it is time to end the Electoral College.

DeBlasio made the remarks during an unrelated press conference in response to a question about the ongoing recount efforts, according to Politico.

“Obviously we have a profound problem. We’ve never seen such a disconnect between the popular vote and the Electoral College vote in the history of this entire country, DeBlasio said.  “And this morning, I checked the numbers again and Hillary Clinton’s up by 2.3 million votes.”

He even reportedly suggested the results may impact the faith of some people in our form of democracy.

“This is absolutely unprecedented, and I think it creates a huge question for our democracy. How is the president-elect going to proceed knowing that he had 2.3 million more people vote for his opponent?”he said.

When specifically asked if he was actually calling for an end to the Electoral College, the mayor replied, “Yes.”