Now That Trump Dropped Birther Issue, Does He Owe Obama the $5 Million He Offered? 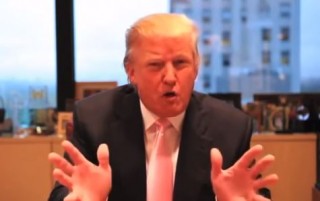 Donald Trump famously offered to give $5 million to the charity of President Barack Obama‘s choosing, if he provided documents showing that he was born in the United States. Now that Trump himself has gone on record as saying Obama was born here, people are starting to hold him to it.

Sent this to @realDonaldTrump spox, to ask how he will fulfill promise to give $5M if assured Pres. Obama born in US pic.twitter.com/Uc751PeGrl

So, what’s the deal, is Trump legally obligated to pay up?

First, in order for Trump to be contractually bound, Obama would have had to actually accept the offer. Second, the offer was not that Trump would donate if he was convinced that Obama was born in the U.S. It specifically referred to Obama turning over college and passport records. This was after the President released his long form birth certificate, “or whatever it may be,” as Trump described it.

“Now, I have a deal for the President,” Trump proposed. “If Barack Obama opens up and gives his college records and applications, and if he gives his passport applications and records, I will give to a charity of his choice — inner city children in Chicago, American Cancer Society, AIDS research, anything he wants. A check, immediately, for $5 million.”

Now, those records were connected to the birthplace issue, as they were to be offered as evidence of the President’s background. But that was a very specific offer that Trump made. Trump saying that Obama was born in the U.S. really doesn’t mean anything, as far as the $5 million is concerned.