North Carolina Bathroom Law is Not a National Issue, Despite Gov’s Claim 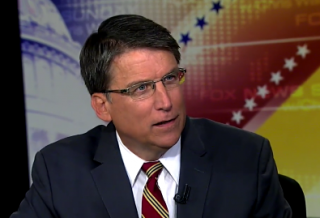 North Carolina Governor Pat McCrory went on Fox News Sunday to discuss his state’s controversial bathroom law with host Chris Wallace. The Department of Justice sent him a letter last week saying that the law, known as HB2, violates the Civil Rights Act and Title IX, and that the state should not enforce it. Part of the law says that bathrooms in state buildings and schools must be designated according to the sex of the user as it appears on their birth certificates. It also says that the state’s anti-discrimination policy protects people based on “biological sex,” omitting protection based sexual orientation or gender identity.

McCrory said that after the Department of Justice’s letter:

This is no longer just a North Carolina issue. This order, this letter by the Justice Department is saying that every company in the United States of America that has over 15 employees is going to have to abide by the federal government’s regulation on bathrooms.

Let’s stop right here. This is very much a North Carolina issue, and nothing more. The DOJ’s letter isn’t saying anything other than that North Carolina is violating a law that already exists. And stating that the letter says anything about private companies is absurd, considering that HB2 has nothing to do with private companies. But even if it was, making it an issue about the institutions instead of the people it affects is like saying that criminal laws are about restricting people’s actions instead of protecting the public.

This is so clearly a case of a politician trying to create a wedge issue during an election year. After the Supreme Court ruled in favor of gay marriage, conservatives like John Kasich acknowledged that even if they don’t like it, it’s settled law. Since then, the country didn’t have a fresh legal issue to divide it along social preferences. When North Carolina passed HB2 and politicians like Ted Cruz came out supporting it, it looked like we were headed down a familiar path.

But then something unexpected happened. The presumptive GOP Presidential nominee, Donald Trump, spoke out against the North Carolina law, referencing the harm it’s had on state business and saying they should have left things the way they were. Now, he did recant when he saw that the Republican base didn’t like that, but even then, he didn’t support it the way Cruz did.

Assuming that the general election will be between Trump and Hillary Clinton, neither Presidential candidate will be strong supporters of the the law. And that means it’s not a national issue, and that we can worry about the million other topics that divide the country. Between Trump University, Clinton’s private email server, and actual issues like economics, immigration, and foreign policy, this election has enough controversy. Do we really need more?