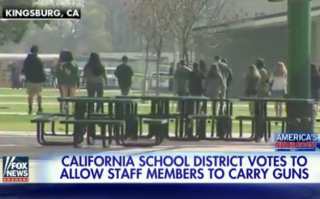 California’s Kingsburg High School District voted Monday night to allow school staff members to carry guns on school grounds, Fox News reported. The measure aims to protect students and faculty from a potential shooting on the premises, as the school grounds do not have a fence or police supervision. Up to five school employees will be allowed to be armed on campus, according to the policy.

School superintendent Randy Morris told Fox News that he will decide who can carry a firearm in school, and their identities will be kept secret. Morris says he has already received offers from potential volunteers. Kingsburg is the second California school district to allow school staff to carry guns.

Kingsburg Police Chief Neil Dadian helped write the new policy. He told Fox News, “It would be comforting or nice to know that somebody was on campus, armed, and could stop the violence.”