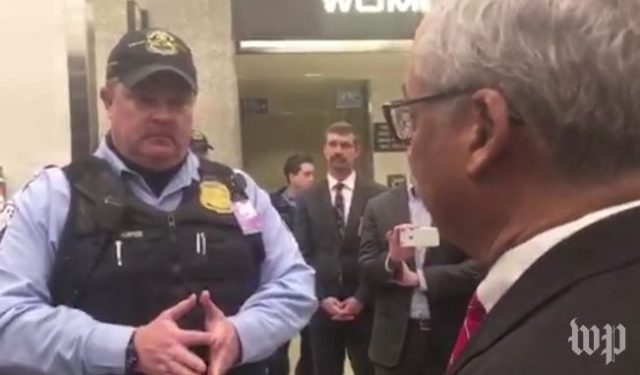 When President Donald Trump‘s original travel ban first went into effect, chaos ensued at airports across the country when people who were on their way to the United States were told they were not allowed to be here. Attorneys and members of Congress responded to assist those in need, but workers at airports stood in their way. Now, documents obtained through a Freedom of Information Act request by The Daily Beast and the James Madison Project show that they were following orders straight from the Department of Homeland Security.

According to records, DHS officials told employees stationed at airports that they were forbidden to talk to members of Congress. An email sent by Todd Owen, the executive assistant commissioner of the Customs and Border Protection (CBP) Office of Field Operations said, “As stated on the call earlier today, you and your staff are NOT to engage with the media or Congressional representatives at this time.” It went on to say, “Please make sure your subordinate Port Directors are following this direction. Please report any such requests to acting AC[REDACTED] from Congressional Affairs. Thank you.” That email was reportedly sent on January 28, just 20 hours after the ban took effect.

Another email referred to “a high volume of calls from various individuals and others claiming to be attorneys regarding the recent Executive Order (EO),” and said, “Please advise all your personnel not to engage the callers nor respond to any questions,” claiming that many of the calls seemed to be from people reading from a script as a form of “telephonic protest.”

Rep. Gerry Connolly (D-Virginia) told the Beast, “Members of Congress have an Article 1 responsibility in the Constitution [to oversee the executive branch], and it is completely improper and, from my point of view, extralegal for the CBP to decide they’re going to ignore the elected representatives of the people.”

Sen. Cory Booker (D-New Jersey) weighed in, saying that he wasn’t particularly surprised by the news based on what happened, but he was taken aback by reading the actual command. “We suspected as much at the time, but it’s jarring to see it in black and white,” he said. “I’ll be seeking more information from CBP on this matter.”

A CBP spokesperson said that the agency’s actions were simply standard procedure. “As part of CBP policy, all congressional inquiries are coordinated through CBP’s Office of Congressional Affairs (OCA),” the spokesperson said. “OCA serves as the single point of contact within CBP for all communications between CBP and Congress. OCA is committed to addressing any question or concern Members of Congress or their staffs may have related to CBP’s complex mission.”