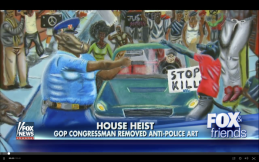 There’s new drama developing on the Hill, and it’s not concerning the current confirmation hearings of Jeff Sessions.  On Friday, California Rep. Duncan Hunter (R-Ca) seemingly took it upon himself to take down a painting he found offensive in the Cannon Tunnel within the Capitol buildings.  The painting, which depicts police officers as pigs, was created by a high school student who had won the annual Congressional Art Competition. The competition is part of a national art competition, allowing one of hundreds of submissions judged by a panel of local artists to hang in the underground tunnel between the Capitol and the Cannon House Office Building.  The latest winner was a constituent of Missouri Rep. Lacy Clay (D-Mo), depicting a scene in Ferguson, Mo.

Hunter is said to have removed the artwork following the request of various police organizations.  However, Clay now seeks criminal charges against Hunter for its removal.  Clay went so far as filing a complaint for theft against Hunter, but it was ultimately denied by the Capitol Police, according to Politico.  In an apparent email to the Capitol Police Chief by Clay’s Chief of Staff, Yvette Cravins, she is quoted as writing: “There is a clear D.C. statute that defines theft — it is a taking and carrying away of the property of another without right…If you have a different perspective please explain. Further, please explain why Congressman Duncan Hunter appears to be above the law.” The Capitol Police had previously announced their distaste of the painting.

According to Professor Jonathan Turley from George Washington Law School, this matter may fall under 18 U.S. Code § 1361, which covers the injury or damage to government property.  The statute specifically reads:

Whoever willfully injures or commits any depredation against any property of the United States, or of any department or agency thereof, or any property which has been or is being manufactured or constructed for the United States, or any department or agency thereof, or attempts to commit any of the foregoing offenses, shall be punished as follows:

Clay has countered that he, as well as several other Black Caucus members, find other pieces of artwork within the Capitol offensive as well (such as statues of Confederate leaders such as Jefferson Davis and Robert E. Lee), but that does not give them the right to remove such pieces because of their personal feelings.

Black Caucus members have also noted that if a private citizen removed the painting in the same manner, he or she would be liable for theft.  In this case, it will be interesting to see if any charges will actually be filed and/or if the painting is reinstated to the Cannon Tunnel.

Update – 3:53 p.m. ET: The painting has been rehung by House Democrats.