NBA Player Shot and Killed After Breaking into Apartment 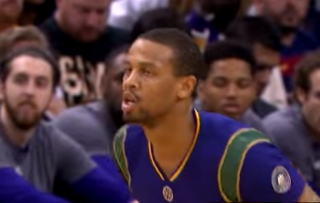 According to Nichols, Dejean-Jones was visiting his girlfriend’s new apartment for the first time, in order to celebrate his daughter’s first birthday. That night, upon returning to the building, he mistakenly went to the third floor instead of the fourth, where his girlfriend lives.

Police, who had responded to a call about a shooting, said that the man who lives in the third floor apartment was sleeping at the time, and awoke to the sound of someone breaking down the front door. The man picked up a handgun and called out, but there was no response until the door was kicked in, at which point he fired, shooting Dejean-Jones. The NBA player left the apartment and collapsed, before being taken to the hospital where he was pronounced dead.

The Pelicans, who had signed Dejean-Jones to a three-year contract in February, said in a statement, “We are devastated at the loss of this young man’s life who had such a promising future ahead of him. Our thoughts and prayers are with Bryce’s family during this difficult time.”

NBA Commissioner Adam Silver said, “Bryce inspired countless people with his hard work and perseverance on his journey to the NBA, and he had a bright future in our league.”