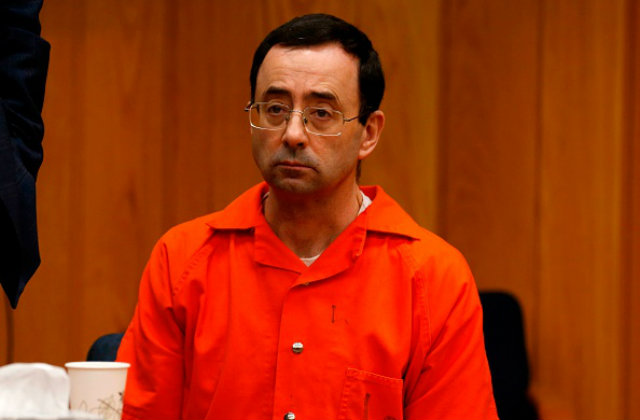 The FBI was running a sluggish investigation into Larry Nassar during the same time period in which 40 women and girls say the disgraced doctor abused them, according to a New York Times report. The feds first learned about allegations in a July 2015 interview with USA Gymnastics officials, but it took them months to speak to certain victims. The beginning of the end only came for Nassar in September 2016 because of an Indianapolis Star exposé.

What took so long? Even before the feds learned about this, Gina Nichols, the mother of Nassar survivor Maggie Nichols, said she told then-U.S.A. Gymnastics President Steve Penny about Nassar in spring of 2015. In spite of her urge to call cops ASAP, he asked her to tell no one, and promised her officials would tell law enforcement. It took 41 days before Penny and then-board Chairman Paul Parilla spoke with FBI agents in Indianapolis, upon the recommendation of an internal investigator.

W. Jay Abbott, then-special agent in charge of the bureau office, told the Times his agents obtained footage in which Nassar performed an inappropriate procedure.

“At the time, it was being portrayed as a legitimate medical procedure,” said Abbott, who retired in January. “But to the layman, like ourselves, we were — ‘You’ve got to be kidding me.’”

Jurisdiction problems slowed down the probe, however. After talking with a federal prosecutor, they sent reports to FBI offices in Michigan and California.

“It was never really our case,” he said.

The FBI apparently kicked the investigation into high-gear only in May 2016, when Parilla and Penny contacted the Los Angeles bureau in another visit. It was only after that that the agency finally contacted Maggie Nichols about the allegation (11 months into the probe), and reached out to Olympic gymnast McKayla Maroney for an in-person interview.

“As time passed, concern about a perceived lack of development prompted Board Chair Paul Parilla and C.E.O. Steve Penny to report the matter a second time to a different F.B.I. office,” USA Gymnastics told the Times in a statement. Parilla and Penny declined, through a lawyer and a spokeswoman, to speak to the Times about this story.

The agency blamed red tape, in a statement to the Times. The outlet complained that the FBI didn’t answer “detailed questions” about the pace of its probe, or to have an official talk about it in detail.

Instead, it issued a 112-word statement asserting that the sexual exploitation of children “is an especially heinous crime,” and that “the safety and well-being of our youth is a top priority for the F.B.I.”

The statement also said that the many allegations against Dr. Nassar “transcended jurisdictions” — an apparent suggestion that internal efforts to coordinate among its bureaus and with other law enforcement agencies partly explained the inquiry’s slow tempo.

The agency also did not dicuss USA Gymnastics officials’ claim that the feds told them not to talk about the case with anybody.