It was sketchy enough when we learned that Melania Trump came to the United States under an immigration program that her husband publicly railed against. Donald Trump criticized H-1B Visa entrants, saying, “these are temporary foreign workers, imported from abroad,” although his wife had used that same “highly-skilled worker” status to come to America as a fashion model. Sketchier still was Melania’s repeatedly holding herself out as having graduated from University of Ljubljana when, in fact, she just plain hadn’t.

As it turns out, though, I think,  there’s a good chance that Mrs. Trump’s loose relationship with the truth bypasses “troubling” and actually could reach the level of “illegal.” I believe the would-be FLOTUS may well have committed visa fraud when she came here to pose for American cameras back in 1995. A few things have been widely reported about Melania Trump’s immigration story: 1) she entered the United States from Slovenia on an H-1B visa in 1996; 2) she traveled back to Europe several times to renew that visa; 3) she later obtained a Green Card and eventually became an American citizen.

During the many interviews Melania Trump has given about her personal American Dream story, she’s been unwavering in her stance on legality of immigration:

“It never crossed my mind to stay here without papers. That is just the person you are,” she said. “You follow the rules. You follow the law. Every few months you need to fly back to Europe and stamp your visa. After a few visas, I applied for a green card and got it in 2001.”
That story echoes with the hard-working and honest refrains of so many immigrant stories. The only problem is that there’s some serious evidence that it could be untrue.

H-1B visas are valid for a minimum of three years (and up to six more) and do not require their holders to return to their home countries for renewals. By contrast, the visas that do require renewal are B-1 (Temporary Business Visitor Visas) or B-2 (Tourist Visas). Okay, so Melania called it an “H1-B in 1996” and it was really a “B-1 in 1995” – no big deal, right? Well, not quite. The issue is more than mis-describing the visa classification. The real problem is that someone entering the United States under a B-1 or a B-2 visa is prohibited from working while in our country. “The minute you come here to work, you need an H1-B Visa,” explained immigration law expert Stuart Altman, Esq.

The only reasonable interpretation of the facts here is that either 1) Melania misrepresented her immigration history by falsely explaining how she made several trips to renew her visa; or 2) Melania accurately described her actions in the mid 90s, but left out the part where she had been here on a non-work Visa.

Melania has had ample chance to clarify things. She was specifically asked about the inconsistencies with her visa stories. Here was her response: 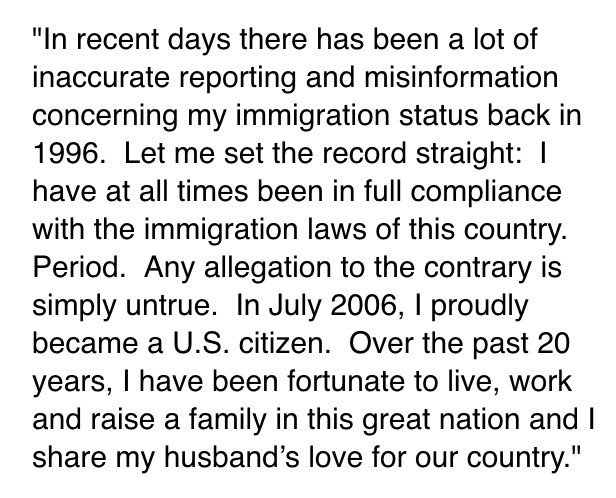 Seriously? Someone points out that there are serious questions about what kind of visa she arrived under, and instead of just saying, “I came here under an [insert the name] visa,” this chick says, “let me set the record straight: I have been in full compliance with the immigration laws of this country.” I know there is a bit of a language gap, but that’s pretty much the opposite of “setting the record straight.” That’s more like “obscuring the record as much as possible under advice of counsel.”

The only issue is whether Melania Knauss, an aspiring, but unknown model, was “working” in 1995 when she posed in the nude for the January 1996 issue of France’s Max Magazine. If she was working while she was here under a B-1 or B-2 visa, that’s visa fraud under 18 U.S. Code § 1546. The penalty for visa fraud can include scrutinizing and revoking every step of the immigration process – including revocation of citizenship and subsequent deportation. Frank J. Riccio II, a criminal defense lawyer who regularly handles immigration matters agreed: “Given the conflicting information about the type of visa used, there would be probable cause for an arrest.” However, the applicable five-year statute of limitations might well prohibit any prosecution of Melania Trump – a fact that would likely be widely considered a scandalous “legal loophole” by her husband in the context of any other offender.

Before we go on, allow me to respond to some predictable arguments, right from the start; if you’re a professional model, and you pose for a photo shoot in a fashion magazine, then that’s “working.” It doesn’t matter who paid you, or how much you got paid, or in what form that payment arrived. It’s “working” and we all know it. Any argument to the contrary is absurd.

I don’t have any problem with Melania or anyone else working in the United States. Even if her actions technically constituted “visa fraud,” I don’t think they show any evil intent on the part of a young Ms. Knauss. Millions of foreign-born people come to America hoping to pursue their dreams – a reality that comprises the very fabric of our Americanism. The fact that Melania Trump could be prosecuted for immigration fraud certainly doesn’t mean that she should be. She was a twenty-six-year-old model who hoped to find fame and fortune on the streets of New York. For that, she gets none of my ire.

Her inane blowhard of a hypocritical husband, however, gets all of it. Trump mounted his entire presidential campaign atop mistrust of immigrants. He riled up angry Americans in every state over foreigners’ abuse of our immigration policies. For him to condemn so many individuals and families when his own wife may have committed immigration fraud is disgusting on a level that only Trump could reach.

Many people come to the United States under B-1 and B-2 visas, and during their time here, need to earn a living so they can support themselves. Although such employment is prohibited by the guidelines of these visas, it’s understandable that many people find it necessary to violate those guidelines. The quagmire that lives at the nexus of immigration law and immigration reality is a complex problem without simple law enforcement solutions. That complexity is apparent to me, even when I’m discussing statements delivered by the wife of a genuinely revolting presidential candidate during a contentious election season.   And yet, the same complexity is rebuffed by a man who fancies himself the great savior of our nation: “as president … I would be very, very tough on the borders, and I would be not allowing certain people to come into this country without absolute perfect documentation.” I guess the definition of “perfect” varies depending Trump’s bedfellow.

Editor’s Note: LawNewz.com was contacted by an attorney for Melania Trump regarding this article. We have responded with a series of follow up questions and are awaiting response.  In the meantime, we have edited the headline and one sentence in this article.  We will consider whether any further updates are appropriate after receiving a reply from Melania Trump’s representatives.

The New York Post filed the following correction to their story:

(Photographer Alé de Basse­ville later told The Post that he misspoke, and the photo session actually took place in 1996 in Manhattan, and appeared in a 1997 issue of the magazine.) The photographer told LawNewz.com that he didn’t remember when he took the pictures.