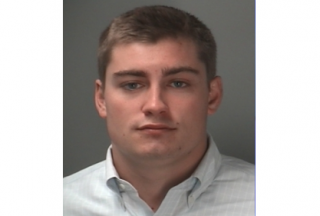 A man who was charged with raping two women while at Indiana University was sentenced to probation after spending one day in jail, WXIN reported.

John Enochs was accused of raping a woman at the Delta Tau Delta fraternity house on the Indiana University campus in April 2015. A woman had told police she had been raped but did not know her attacker. She said that he held her down even though she told him to stop more than once. She later managed to get away, but health workers found that she suffered injuries to her genitals. Security footage showed her enter a room with Enochs, and she left after 24 minutes, according to police.

While authorities looked into that case, they discovered a victim from another case from 2013, who identified Enochs as her attacker. After examining DNA evidence and hearing from witnesses, police arrested Enochs for that case as well.

In the end, however, Enochs only spent one day in jail, pleading guilty to a misdemeanor charge of battery with moderate bodily injury. Prosecutors dismissed both rape charges. Enochs was sentenced to probation on Thursday.

This comes soon after another college rape case resulted in a probation sentence, with Brock Turner being convicted of three sexual assault felonies with a sentence of six months in jail, followed by probation. The difference with this case, however, is that Enochs was not actually convicted of any sex crimes.

Prosecutors have not given details as to why they agreed to dismiss the rape charges, but according to ABC News, a statement issued on Enochs’ behalf maintains that he is innocent of those allegations. “As the Monroe County prosecutors’ office has acknowledged through their voluntary dismissal of the rape charges, John Enochs did not rape anyone and he should never have been charged with these offenses, ” the statement said. It also alleged that alcohol was part of what led to confusion, and the woman involved in the 2015 incident acknowledged she had been drinking on the night in question, ABC News reported.

Enochs’ statement blamed the lead investigator in the case for presenting “false and misleading evidence” and not “provid[ing] the Court with exculpatory evidence.”

On June 16, the woman, going by the name Jane Doe, filed a lawsuit against Indiana University and the Delta Tau Delta fraternity. The lawsuit makes claims under Title IX, saying that the school and the fraternity ignored Enochs’ history of sexual assault, citing the alleged 2013 incident.

You can read that lawsuit below: