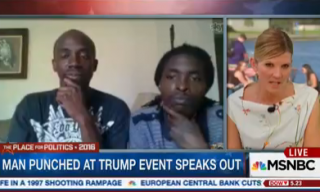 Rakeem Jones, the man seen on video being punched by John McGraw at a Donald Trump rally, appeared on MSNBC on Thursday to discuss the incident. Jones had been protesting the event and was being escorted out by law enforcement officers, when McGraw punched him in the face. Jones did not appear upset about having to leave, but was furious that even though officers surrounded him when he got hit, none of them acted in apprehending McGraw. Instead, they treated Jones like the criminal. McGraw was finally arrested the next day.

McGraw told Inside Edition: “We don’t know if he’s ISIS…the next time we see him, we might have to kill him.” Jones replied, “Bless his heart,” which, if you know Southern culture, is pretty much the worst thing you could say to a person.

The Trump campaign’s response? “We are not involved.” Here is the video from the MSNBC interview: