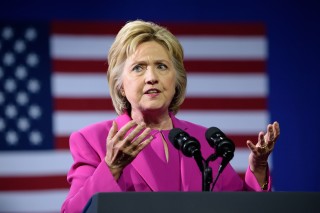 Meredith McGehee serves as the Policy Director at the Campaign Legal Center, a nonpartisan organization that seeks to enforce campaign finance laws.

Even if everything the Associated Press has reported so far about the link between donations to the Clinton Foundation and access to then-Secretary of State Hillary Clinton is confirmed—including the most damning allegations—nothing that has been revealed to date is likely ever to be prosecuted. That is because the current Supreme Court seems to think selling access is not illegal. This is not to say that the actions of Hillary Clinton or the functionaries she surrounded herself with are on the level. Rather, it is because the Court has all-but-legalized what most people consider to be corruption, especially in the form of pay-to-play.

So even if Clinton’s team put meetings at the State Department on the auction block, or arranged for donors to schmooze with world leaders, or pressed for policy changes that favored donors, at least so far there do not appear to be violations of current anti- corruption laws as the courts now interprets them. None of what has been reported counts as legally corrupt as far as the out-of-touch Roberts Court is concerned, and thus will likely never be prosecuted.

For decades, political corruption meant what most Americans think it means. The Supreme Court (in Buckley v. Valeo and McConnell v. FEC) embraced this ordinary view of corruption, holding that giving and taking bribes was only the most blatant kind of corruption. Then came a series of cases in which the Supreme Court eviscerated that meaning and replaced it with the free-for-all corruption rules that insulate today’s political candidates. The process began in Citizens United, where the Court significantly narrowed the definition of corruption. Justice Anthony Kennedy, writing for the majority (and providing no basis for his opinion), asserted that the appearance of influence or access obtained by campaign contributions “will not cause the electorate to lose faith in this democracy.”

Then, in 2014, the Court’s majority in McCutcheon v. FEC decided that corruption only counts if it comes in quid pro quo form. In English, the Court decided that only an explicit agreement of an exchange of money for an official action qualifies—anything else is, by definition, not corruption. According to Chief Justice Roberts and four of his colleagues, “the Government may not seek to limit the appearance of mere influence or access.” He went on:

Government regulation may not target the general gratitude a candidate may feel toward those who support him or his allies, or the political access such support may afford. Ingratiation and access are not corruption.”

In other words, if donors to the Clinton Foundation—or even Clinton’s presidential campaign—were granted meetings with the State Department, nothing in those grants of access would meet the standard of what constitutes illegal corruption according to the Supreme Court. In fact, in their view, such access and influence merits First Amendment protection.

loans and gifts from businessman Jonnie Williams, who was seeking to promote his nutritional supplement. In return, the Governor set up meetings for Williams with state officials—pushing for Virginia universities to research the supplement so that it could obtain FDA approval. To most people, that not only creates the appearance of corruption, it is indeed corruption.

But not to the Supreme Court. Going beyond McCutcheon, the Court decided that only “official acts” can qualify as “quos” in an illegal quid-pro-quo system. Aspiring public servants should take note—the following actions are, by definition of the Supreme Court, no longer corrupt, no matter how much money or favors a donor gives you to do them: (1) Arranging meetings with Government officials to promote a donor’s business; (2) Hosting and attending events at the Governor’s Mansion to persuade university researchers to promote a donor’s product; and (3) Permitting donors to hold exclusive events for their business in the Governor’s Mansion.

In light of these cases, the ties between donations to the Clinton Foundation and meetings with the State Department are, legally speaking, probably untouchable.

Political corruption today, in the eyes of the law, diverges from what ordinary people consider to be corruption. It does so in ways that undermine the integrity of officials, who are – now more than ever – beholden to donors, and not constituents. That non-corruption corruption erodes the people’s faith in democracy, as they realize that donors get the chance to plead their case, while the rest of us look on from the outside.

The Clinton Foundation is not the first institution in which these issues have arisen. Other politicians have associated with nonprofits or universities that served a similar purpose—to provide donors a way to funnel money through tax-exempt entities as a means of gaining the attention and favor of politicians.

Former Senate Minority Leader Robert Dole (R-KS), who formed a foundation to work on disability issues, was among the first to figure out this trick. The Dole Foundation, like the Clinton Foundation, did terrific work. That was not the problem. The problem was that word spread around Washington that the way to get on Senator Dole’s radar screen was to donate to the Foundation. Donating was better than giving to Dole’s campaign committee because the amounts could be larger, and he had little electoral competition back home.

Senate Majority Leader Mitch McConnell (R-KY) and Patrick Leahy took a different tack. Senator McConnell lends his name to McConnell Center at the University of Louisville, while Senator Leahy has his namesake, the Leahy Center at Lake Champlain. But the message is the same—give to our favored cause and your generosity will be noticed.

While the Clinton Foundation story dominates today’s headlines, the underlying story is that the buying and selling of access by politicians is too often the ordinary course of business in politics. And the weightier concern is that the Roberts Court is putting its imprimatur on a steady march toward legalizing what the vast majority of Americans consider to be political corruption.