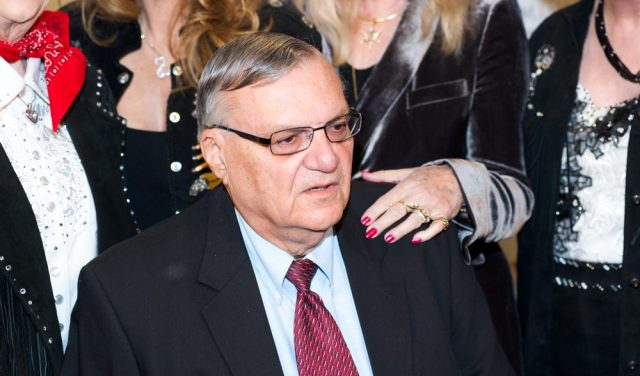 On Friday, President Donald Trump followed through with what many expected he would do: he pardoned former Maricopa County Sheriff Joe Arpaio, who had been convicted weeks earlier for criminal contempt of court. Arpaio had ignored a court order to cease tactics that he employed to combat illegal immigration. Those tactics included traffic patrols that went after immigrants. Now, the Protect Democracy Project, a group formed by former White House attorneys, wants the U.S. Department of Justice, who prosecuted the case, to oppose the pardon and maintain Arpaio’s conviction. The group claims that the pardon violated the Constitution.

A letter they sent to the DOJ argues, “While the Constitution’s pardon power is broad, it is not unlimited,” claiming that if a pardon violates the Constitution, it is improper. Here, they argue, the pardon of Arpaio raises issues regarding the Fifth Amendment right to due process, because “for due process and judicial review to function, courts must be able to restrain government officials.” Generally speaking, due process rights attach to matters involving the people who are detained, not the people doing the detaining. However, the letter explains that by failing to hold people like Arpaio accountable, it weakens people’s rights to be protected from illegal acts by others in his position.

The letter acknowledged a legal flaw in their position, which is that it has already been decided that someone can be pardoned for a contempt of court conviction. However, they attorneys who signed the letter distinguish Arpaio’s case by saying that his act of contempt was more serious because it impeded on other people’s constitutional rights.

The letter was also signed by leadership from the organization Free Speech for People, a group which has focused mainly speech issues as they pertain to campaign finance in the wake of the Citizens United ruling.

“The pardon power has long been assumed to be quite broad because most expect the president to exercise it responsibly. But this pardon presents a new legal category that no court has ever considered,” Ron Fein, director of the organization, said in a statement. “In instances where a president abuses the pardon power or uses it in a way that conflicts with other constitutional provisions, a court may well decide that a pardon that exceeds constitutional limits can be declared invalid, in addition to the possibility of impeachment of the president who issued the unconstitutional pardon.”

In addition to the battle over the pardon, Arpaio’s legal team is also pushing for Judge Susan Bolton‘s entire ruling against him to be thrown out. The ruling, in addition to announcing Arpaio’s conviction, detailed why she found him guilty, citing statements that Arpaio had made in the media.