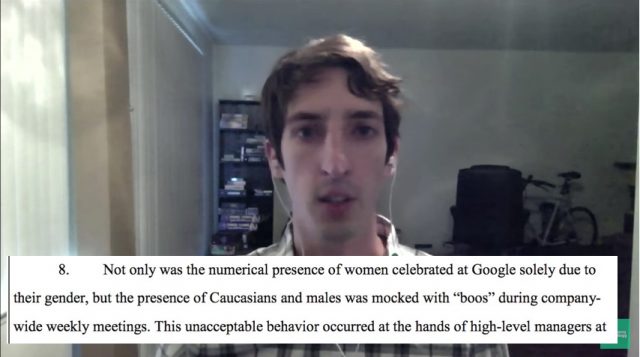 A lawsuit filed against Google by fired developer James Damore accuses the tech giant of various instances in which conservatives and white men were discriminated against while he was with the company.

Filed today in California, the lawsuit against Google, LLC claims, “Google employs illegal hiring quotas to fill its desired percentages of women and favored minority candidates, and openly shames managers of business units who fail to meet their quotas — in the process, openly denigrating male and Caucasian employees as less favored than others.”

Damore filed alongside co-plaintiff David Gudeman and the lawsuit also seeks class action status in order to represent, “all employees of Google discriminated against (i) due to their perceived conservative political views…(ii) due to their male gender…and/or (iii) due to their Caucasian race.” The lawsuit continues:

Not only was the numerical presence of women celebrated at Google solely due to their gender, but the presence of Caucasians and males was mocked with “boos” during company-wide weekly meetings. This unacceptable behavior occurred at the hands of high-level managers at Google who were responsible for hundreds, if not thousands, of hiring and firing decisions…

The lengthy complaint totals some 62 pages and contains in excess of 100 additional exhibits and appendices, most of which are comprised of memes or social media posts made by Google employees.

One subgroup of additional materials attached to the lawsuit is titled “Anti-Caucasian postings.” The contents of this subgroup of additional materials include: (1) female Google employees complaining about Google’s alleged culture of sexual harassment against women; (2) discussions of toxic masculinity; (3) the sharing of a post suggesting that people stop reading white, male authors for one year; and (4) a criticism of Dilbert creator Scott Adams.

Google did not immediately reply to a Law&Crime request for comment.

Damore became a media mainstay after penning a highly controversial 3,300-word memo arguing against Google’s perceived culture of political correctness. He also distinguished himself by arguing that the gender gap at tech companies is the result of “biological causes,” and that the men are simply better equipped than women for tech jobs.

A spokesperson with Google’s press team provided Law&Crime the following statement in response:

We look forward to defending against Mr Damore’s lawsuit in court.