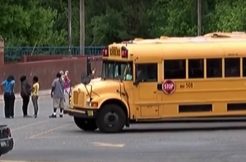 The Council on American-Islamic Relations (CAIR) said on Wednesday that a 5-year-old at David Cox Road Elementary School suffered at sorts of harassment. The statement quoted a letter that CAIR Civil Rights Staff Attorney Maha Sayed wrote to the local school board. In this letter, she said the kid was “routinely” singled out, and forced to carry a heavy backpack all day. This caused him “significant back pain.” On Nov. 16, the teacher reportedly even choked the student until another teacher separated them.

“[The teacher] would also treat [the student] harshly and reportedly called him ‘bad Muslim boy’ on multiple occasions,” she wrote in the letter.

CAIR now demands into an investigation, and they cite parts of the Civil Rights Act of 1964. Charlotte-Mecklenburg Schools spokeswoman Renee McCoy told CBS News that they’re investigating the allegations, but said she can’t comment further in part because it is Thanksgiving season and many employees are unavailable. With that in mind, we’ve reached out to her for any new information that may emerge after the holiday.

Update – Jan. 18, 3:24 p.m. ET: The Mecklenburg County District Attorney’s Office said they found no evidence of the allegation, according to a school statement obtained by WCCB.

[Screengrab of school property via WBTV]