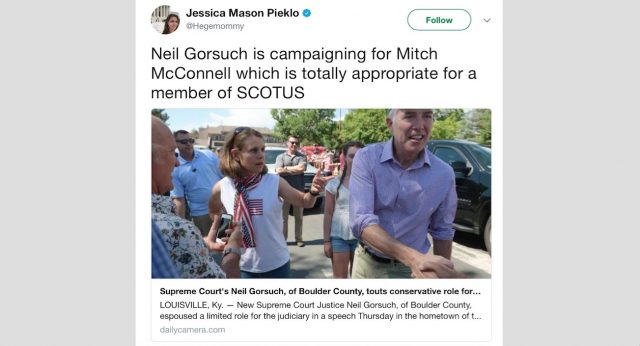 Lawyer and writer Jessica Pieklo leveled the accusation against Gorsuch in a series of Twitter updates yesterday. Her initial tweet reads, “Neil Gorsuch is campaigning for Mitch McConnell which is totally appropriate for a member of SCOTUS.”

Neil Gorsuch is campaigning for Mitch McConnell which is totally appropriate for a member of SCOTUS https://t.co/6ylsrktpzI

That tweet links to an Associated Press article in the Daily Camera. The article focuses on a speech Gorsuch gave in Louisville, Kentucky about why it’s important that judges have a limited and conservative role in deciding what the law is.

Louisville is McConnell’s hometown and he was in the audience for the speech–a few feet away from the Supreme Court Justice. The speech was given at the University of Louisville, which is McConnell’s alma matter. And, before addressing the crowd, Gorsuch was introduced by the Senate’s top Republican.

McConnell said, of Gorsuch, “I could not have been happier [when he was nominated.] I knew he’d be great for our country.”

Gorsuch’s appearance with McConnell is apparently one of many as two are touring the Bluegrass State together. Later that same night, the pair held an event at the University of Kentucky in Lexington.

The article referenced by Pieklo doesn’t explicitly refer to the Gorsuch-McConnell statewide team-up as campaigning, however it does go on to suggest the political nature of the joint show-boating:

Thursday’s appearance amounted to a home turf victory lap for McConnell, who helped prevent Democratic President Barack Obama from filling the seat last year with Judge Merrick Garland. The Kentucky senator blocked Garland’s nomination for nearly a year, refusing to even allow a confirmation hearing, so the next president could make the nomination after the election.

Pieklo, an adjunct law professor at Hamline University School of Law in Boulder, Colorado, followed up her initial tweet by wondering out loud whether Gorsuch might be “the most unethical Justice” in U.S. history:

How could there POSSIBLY be an appearance of bias when Gorsuch is glad-handing with Kentucky Republicans.

Most unethical Justice yet? https://t.co/LoriZ8wItC

She then suggested that Gorsuch ought to recuse himself from any future health care related decisions–but dismissed the thought out of hand. Later today, she accused Gorsuch of exhibiting a pattern of less-than-ethical behavior.

LawNewz reached out to both Pieklo and Senator McConnell’s office for comment on this story, but responses were not received. This post will be updated if and when either Pieklo or McConnell replies. The Supreme Court’s public information office is unable to comment on any press inquiries during the weekend.