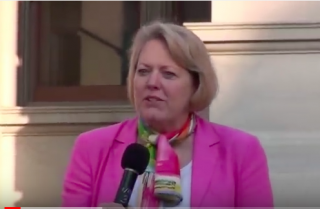 Even though Donald Trump won the Virginia primary by a landslide, the state’s Republicans elected to send at-large-delegates to the Republican National Convention who are much more loyal to Ted Cruz during this weekend’s state convention. Cruz supporters secured 10 of the 13-at-large Virginia delegates. One of the Cruz-supporting delegates includes Virginia Thomas, the wife of Supreme Court Justice Clarence Thomas. The remaining three delegates are Trump supporters, according to The Washington Post.

Mrs. Thomas is active in the Republican party, and, according to Politico, was head of a tea party group that worked to defeat Democrats in the 2010 election. She has come under fire for her role in politics and whether what she does taints her husband’s ability to fairly decide cases. In 2009, she founded Liberty Consulting which worked to form “a bridge between the conservative establishment and the anti-establishment tea party movement.”

“I am looking for the kind of person who will be the leader of the free word. Someone who has a North Star; someone who is a principled, experienced conservative. And Ted Cruz has got the scars to show he has tangled with the top Republican leaders and Democrats leaders in town…Rhetoric and promise on the campaign trail are not enough,” Virginia Thomas said, in an endorsement video posted on Cruz’s campaign website.