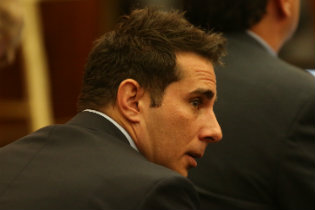 On Thursday, less than 24 hours after a bittersweet pizza party at the Gawker Media office in New York City to commemorate the bankruptcy-induced end of the company’s independence, the hits kept on coming in court. Back in Pinellas County, Florida, Hulk Hogan (real name Terry Bollea) got control of the assets of  former Gawker editor-in-chief A.J. Daulerio. Daulerio was the Gawker staffer most instrumental in the posting of the Hogan sex tape,which led to Hogan getting a favorable jury verdict in an invasion of privacy trial in March.

Daulerio’s co-defendants, Gawker Media and Nick Denton, have both filed for bankruptcy. As a result, the $115 million in compensatory damages awarded by the jury are all Daulerio’s responsibility. Daulerio also owes $100,000 in punitive damages. In an affidavit filed Wednesday, Daulerio explained that his assets boil down to 0.0059% of Gawker’s Cayman Islands-based sister company, 44.7% of RGFree, the parent company of Ratter, which is no longer operational and was never profitable, $1,505.78 in a checking a account, and a small amount of personal affects.

On Monday, the checking account was frozen due to a court order. with a hold for $230.2 million, twice the amount of the judgment (not clear why it’s doubled) being placed on by Chase. Then, on Thursday, Daulerio took to the Ratter Twitter account to protest:

That hashtag is aimed at billionaire Peter Thiel, who’s admitted to funding Hogan’s legal bills to punish Gawker, by the way.

As the Tampa Bay Times’ Claire McNeill, who was at the hearing, explained on Twitter, the control of Daulerio’s assets include the rights from his Gawker employment contract that make the company pay for any legal judgments against him:

Those indemnity rights could potentially cover the entirety of the $115.1 million judgment against Daulerio #hulkvsgawk

According to McNeill, whether or not Daulerio will get an allowance for living expenses will be determined at some point after he gives a deposition next week. At the next hearing, on Halloween, the judge will rule on whether Hogan’s allegation that Daulerio concealed the indemnity agreement to obscure his net worth will lead to Daulerio being sanctioned.

By the way, as for that Gawker pizza party we mentioned earlier? As it was going on, the neighborhood around the company’s offices was covered with these flyers depicting founder and Daulerio co-defendeant Nick Denton:

Oh and then this was on a phone pole so I really can't figure out what is happening in this world right now. pic.twitter.com/DiXgCjzzKw