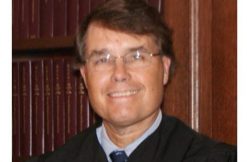 William E. Smith would like it if you stopped writing him letters. The judge was presiding over a recent breach-of-contract lawsuit in the U.S. District Court for the District of Rhode Island. In Spring 2016, a Brown University disciplinary hearing determined that a male student, known in court documents as “John Doe,” was responsible for sexual assault. Doe was kicked out of school until the alleged victim graduates, but he fought the claim. Smith agreed that the hearing was flawed, and so issued a preliminary injunction. Doe can return to campus for now. But Smith had more to say. Campus activists had written him letters to influence his decision, and he was not a fan of this tactic.

From his ruling, published on Friday:

Moreover, the Court is an independent body and must make a decision based solely on the evidence before it. It cannot be swayed by emotion or public opinion. After issuing the preliminary injunction this Court was deluged with emails resulting from an organized campaign to influence the outcome. These tactics, while perhaps appropriate and effective in influencing legislators or officials in the executive branch, have no place in the judicial process. This is basic civics, and one would think students and others affiliated with a prestigious Ivy League institution would know this. Moreover, having read a few of the emails, it is abundantly clear that the writers, while passionate, were woefully ignorant about the issues before the Court. Hopefully, they will read this decision and be educated.

The letter-writers were working on behalf of Doe’s alleged victim, who still attends the school. Student Alex Volpicello announced the campaign via a September 1 article.

Please, I am begging you to send an email to Judge Smith (there’s a template you can copy and paste at the end of this post). Stress to him that not only does the irreparable harm that has been inflicted upon the survivor (emotionally, physically, mentally, and financially) obviously outweigh any consequence to the assailant, but that they are also outweighed by Brown’s interests. Female Brown students cannot be safe with someone who believes that sexual coercion and manipulation can reasonably be used on young women. Please tell him that this is not only morally unjust to the survivor, but that it is a public safety hazard.

Then again, Smith didn’t make a decision about Doe’s actual culpability. As he pointed out in his opinion:

This is not to say that the Court passes judgment on whether the outcome – that Doe was found responsible – was an error. The Court makes no finding as to Doe’s responsibility; that is for the Brown panel to decide if it chooses to represent the matter after correcting the errors cited.

To be clear, Smith ruled that Brown, in its code, lacked a definition of a consent during November 2014, the time of the alleged sexual assault. The school developed a definition in 2015, the year in which the claim was brought forward. Smith also ruled that during the hearing, Doe wasn’t allowed to bring forward evidence on his behalf (he claimed the incident was consensual).

So he can go back to school for now. However, the university can still reinvestigate the assault claim.

This case is another example of how sexual assault cases complicate due process. Some will say that historically, victims are rarely believed by law enforcement because of harmful cultural beliefs about women and their sexuality. Therefore, they need all the support they can get. Others will counter that the University violated the plaintiff’s rights, and that the letter-writing campaign is completely inappropriate.

This is an ongoing matter. Brown issued a statement on Friday. There’re mum on whether they’ll reinvestigate the student:

The court’s ruling means that John Doe remains an enrolled student at Brown. While Doe is not taking courses at Brown this semester, the judge’s decision provides him with the option to return to campus in the semesters ahead, should he choose to do so. The University will make a determination on what, if any, further action is needed should he indicate his intent to return to campus.