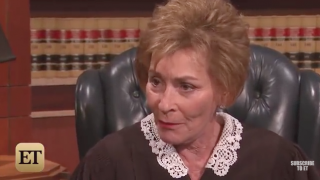 If you didn’t know before, now you do: Judge Judy Scheindlin is filthy rich. And now her millions are being called into question in Los Angeles Superior Court by Rebel Entertainment Partners, the plaintiff in a breach of contract lawsuit filed today against CBS for unspecified damages.

So, here’s what happened. CBS, over the course of several years, began reporting significant losses to Rebel and ceased paying Rebel any net profits despite CBS’s contractual obligation to do so, according to the lawsuit. In a clever accounting scheme, CBS is accused of finding a way to report marginal losses to skirt their obligations to make payments to Rebel based on net profits.

While Judge Judy the television show was reportedly “losing money,” Judge Judy the human was collecting a salary of up to $47 million a year. Rebel claims, “Defendants further reduced Rebel’s net profits by licensing the Show to CBS’s corporate affiliates — television stations owned or operated by CBS — for below-market fees in transactions that were not negotiated at arms-length.” This type of licensing scheme is most often associate with the Double Irish Switch tax avoidance strategy used by major companies like Google to avoid paying taxes in the U.S. Tax avoidance is one thing, bad faith accounting to skirt contractual obligations is another—the optics of this case don’t look good for CBS.

The sharply-worded lawsuit claims CBS went further than simply circumventing payments. “Not content with simply wiping out Rebel’s net profits, Defendants breached other contractual obligations as well,” according to the 10-page complaint. “For example, Defendants are required to discuss in good faith with Rebel a packaging fee for any ‘spin-off, remake, sequel or episodic television series’ derived from the show.”

The complaint continues, “[h]owever, when Defendants created the show Hot Bench, which the director of programing at one CBS affiliate station called ‘a spin-off from Judge Judy Sheindlin,’ no one approached Rebel to discuss a packaging fee.”

Judge Judy was by far the highest paid television personality in the time period where Rebel alleges CBS began to ignore their contractual obligations. The former Manhattan family court judge was reportedly paid around $45 million, while other television personalities like David Letterman ($28 million), Jay Leno ($25 million), and Conan O’Brien ($10 million), Jon Stewart ($30 million) and Matt Lauer ($25 million) were paid considerably less, informing Rebel’s belief that it could not be possible that CBS was “losing money,” but paying above market value for the judge’s no nonsense services.

“By using other people’s money to pay for Judge Judy’s exorbitant salary, CBS has acted in extreme bad faith and in a manner that is not in any way reasonable or consistent with industry practices,” attorney Bryan Freedman told Deadline today. “Even Judge Judy would rule against CBS in this case.”

CBS did not respond to Deadline’s request for comment on today’s lawsuit.